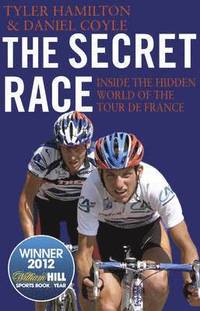 Inside the Hidden World of the Tour de France: Doping, Cover-ups, and Winning at All Costs

av Daniel Coyle, Tyler Hamilton
(3 röster)  |  Läs 1 recension
Häftad Engelska, 2013-05-09
108
Köp
Spara som favorit
Finns även som
Visa alla 2 format & utgåvor
WINNER OF THE WILLIAM HILL SPORTS BOOK OF THE YEAR AWARD On a fateful night in 2009, Tyler Hamilton and Daniel Coyle met for dinner in Boulder, Colorado. Over the next eighteen months, Hamilton would tell Coyle his story, and his sport's story, in explosive detail, never sparing himself in the process. In a way, he became as obsessed with telling the truth as he had been with winning the Tour de France just a few years before. The truth would set Tyler free, but would also be the most damning indictment yet of teammates like Lance Armstrong. The result of this determination is The Secret Race, a book that pulls back the curtain and takes us into the secret world of professional cycling like never before. A world populated by unbelievably driven - and some flawed - characters. A world where the competition used every means to get an edge, and the options were stark. A world where it often felt like there was no choice.
Visa hela texten

Brilliantly detailed and wholly convincing: with Coyle's skill and Hamilton's honesty, the book was always likely to be excellent. This is no generalised or theoretical exploration of a doping culture but a forensic description of how it worked. Armstrong used to say there would always be sceptics who didn't believe in his story, but now the sceptics are those who, ostrich-like, continue to believe. They should be compelled to read this book, and though the collision with reality will cause them to shudder, the good news is that they will be riveted by a well-told story and will be the better for knowing the truth. -- David Walsh * Sunday Times * The broadest, most accessible look at cycling's drug problem to date. * New York Times * The news leaks about The Secret Race have vastly undersold its importance. Tyler Hamilton's book is a historic, definitive indictment of cycling's culture of doping during the Armstrong era. Here's the reality. The Secret Race isn't just a game changer for the Armstrong myth. It's the game ender. No one can read this book with an open mind and still credibly believe that Armstrong didn't dope. It's impossible. That doesn't change the fact that he survived cancer and helped millions of people through Livestrong, but the myth of the clean-racing hero who came back from the dead is, well, dead. The book is the holy grail for disillusioned cycling fans in search of answers. The book's power is in the collected details, all strung together in a story that is told with such clear-eyed conviction that you never doubt its veracity. * Outside magazine * Astonishingly candid... an extraordinary confessional. -- Matt Dickinson * The Times * Riveting... Just about every significant detail in the USADA evidence is here. And it is brilliantly conveyed by an insider who can see both sides of the story: the institutional corruption, which eats away at the culprits, as well as the crippling pressure on riders to conform. We can expect plenty more books to be published on this conspiracy, for it is arguably the most audacious ever plotted in the world of sport. But it feels as though Hamilton's is likely to become the definitive work on the subject. -- Simon Briggs * Daily Telegraph *