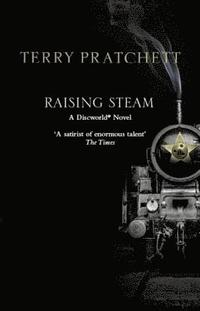 av Terry Pratchett
Häftad Engelska, 2017-05-18
98
Köp
Spara som favorit
Finns även som
Visa alla 6 format & utgåvor
THE NUMBER ONE BESTSELLER 'Everybody wanted the railway close, oh yes please, but not so close that they could hear it or smell it' It's only in dictatorships that the trains run on time. Everywhere else, signal failures, leaves on the line, the wrong type of snow and the wrong type of sunlight make departure and arrival times just a nice, idealistic theory. So when it becomes a matter of life and death to get a train somewhere on time, the odds don't look good - especially if that somewhere is a completely new destination. The only thing that upsets people more than railway delays, after all, is building more railway. Past their back gardens. And some of those people will go to extremes to stop locomotion in its tracks... 'British fiction's most brilliant satire on contemporary life' Telegraph 'The most serious of comedies, the most relevant and real of fantasies...at once hilariously cynical and idealistically practical' Independent
Visa hela texten

"Consistently funny, wise and clever. . . . Rewarding to both longtime readers and novices, filled with characters who leap off the page and metaphors that make you laugh out loud. . . . Pratchett's appeal isn't just his roller-coaster plots but the depth of his ideas." -Sam Thielman, Newsday "Salted among all the treacle miners and nascent trainspotters are some serious ideas about technology and the irrevocable changes it brings. . . . While exploring questions about the unintended consequences of technology, Pratchett also blasts fundamentalists who resist all progress. But mostly he seems to be having fun with words in the very British strain of absurdist humor that he has made his own. And 40 books in, why not?" -Sara Sklaroff, The Washington Post "A delightful fantasy send-up of politics, economics and finance, as the Discworld gets a railway and complications ensue. . . . A lovely homage to the courage at the core of technological advance. . . . Pratchett melds politics, finance and the occasional dark turn with his fantasy and humor, and as ever his footnotes are not to be missed. . . . How many writers are more fun to spend time with?" -Ken Armstrong, The Seattle Times "A spectacular novel, and a gift from a beloved writer to his millions of fans. . . . A tremendous synthesis of everything that makes Pratchett one of the world's most delightful writers." -Cory Doctorow, Boing Boing "What began with a farcical satire of pseudomedieval fantasy has become a Dickensian mirror of contemporary western society. . . . Raising Steam is the latest transformation of a remarkable fictional world that has evolved and grown with its creator-and it shows how, in the way of many things invested with devotion on the Disc itself, the Discworld has taken on a life of its own." -Karin L. Kross, Tor.com "From the first, the novels demonstrated Pratchett's eye for telling detail and the absurdities of the human condition. . . . He remains one of the most consistently funny writers around; a master of the stealth simile, the time-delay pun and the deflationary three-part list. . . . I could tell which of my fellow tube passengers had downloaded it to their e-readers by the bouts of spontaneous laughter." -Ben Aaronovitch, The Guardian "Terry Pratchett's creation is still going strong after 30 years. . . . Most aficionados, however, will be on the look-out for in-jokes and references from previous novels-of which there is no shortage. Discworld's success, like that of Wodehouse's Jeeves and Wooster stories, has never been driven by the plots. . . . It is at the level of the sentence that Pratchett wins his fans." -Andrew McKie, The Times (London) "A brash new invention brings social upheaval, deadly intrigues, and plenty of wry humor to the 40th installment of Pratchett's best-selling Discworld fantasy series. . . . As always, Pratchett's unforgettable characters and lively story mirror the best, the worst, and the oddest bits of our own world, entertaining readers while skewering social and political foibles in a melting pot of humanity, dwarfs, trolls, goblins, vampires, and a werewolf or two." -Publishers Weekly (starred review) "Brimming with Pratchett's trademark wit, a yarn with a serious point made with style and elegance." -Kirkus Reviews "Leavened with Pratchett's usual puns, philosophical quips, and Discworld in-jokes, the story offers an amusing allegory of Earthly technology's many seductions." -Booklist Praise for Terry Pratchett "Terry Pratchett may still be pegged as a comic novelist, but . . . he's a lot more. In his range of invented characters, his adroit storytelling, and his clear-eyed acceptance of humankind's foibles, he reminds me of no one in English literature as much as Geoffrey Chaucer. No kidding." -Michael Dirda, The Washingt