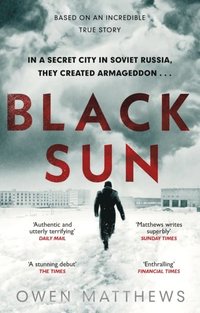 Based on a true story, the critically acclaimed Soviet thriller

av Owen Matthews
Häftad Engelska, 2020-07-09
99
Köp
Spara som favorit
Skickas inom 7-10 vardagar.
Fri frakt inom Sverige över 159 kr för privatpersoner.
Finns även som
Visa alla 3 format & utgåvor
'Outstanding' SUNDAY TIMES 'A stunning debut thriller . . . utterly terrifying . . . absolutely riveting' DAILY MAIL 'Fascinating . . . fearsome' FREDERICK FORSYTH 'Enthralling' FINANCIAL TIMES 'Thrilling . . . compelling' SIMON SEBAG MONTEFIORE 1961. Hidden deep within central Soviet Russia is a place that doesn't appear on any map: a city called Arzamas-16. Here dedicated scientists and technicians are building the most powerful nuclear device the world will ever see - three thousand times more powerful than Hiroshima. But days before the bomb is to be tested, a young physicist is found dead. His body contains enough radioactive poison to kill thousands. The authorities believe it is suicide - they want the corpse disposed of, the incident filed and forgotten. But Moscow is alarmed by what's going on in this strange, isolated place. And so KGB major Alexander Vasin is sent to Arzamas to investigate. What he finds there is unlike anything he's experienced before. His wits will be tested against some of the Soviet Union's most brilliant minds - eccentrics, patriots and dissidents who, because their work is considered to be of such vital importance, have been granted the freedom to think and act, live and love as they wish. For in Arzamas, nothing can be allowed to get in the way of the project. Not even murder . . . Intricately researched, cunningly plotted and brilliantly told, Black Sun is a fast-paced and timely thriller set at the height - and in the heart - of Soviet power from the acclaimed author of An Impeccable Spy. What readers are saying: 'Woven around real events, people and places, it's genuinely terrifying stuff' ***** 'The twists and turns and intrigue kept me on tenterhooks' ***** 'Brings alive one of the most fascinating periods of Soviet history' *****
Visa hela texten

'[Matthews] impressive first novel . . . the murder investigation is clever, the science neatly explained . . . and the descriptions . . . are revealing. * LITERARY REVIEW * Gripping and authentic. -- Jason Goodwin * COUNTRY LIFE * Based on real events . . . this story is set in a secret Soviet city in 1961. Featuring murder and betrayals, and a flawed but principled KGB man as its hero, it unfolds in the aftermath of Stalinism, amid the scars left by the purges, denunciations and Great Patriotic War. The author, a former Moscow correspondent, knows his terrain inside out. * THE ECONOMIST 'Books of the Year' * Atmospheric . . . his evocation of the landscape and times is sharp, and the insights into the horrors of the Communist past chastening . . . a powerful and gripping piece of writing. -- Maxim Jakubowski * CRIME TIME * A thoroughly dark and disturbing thriller. -- Jon Wise * SPORT * A rattlingly good yarn . . . Matthews has the uncanny ability to transport the reader back in time to the Soviet Union of 1961 . . . a debut novel which deserves a wide readership. -- Trevor Royle * THE HERALD * Brilliantly plotted and all the more satisfying because it is based on a true story . . . Something else, too: you get it that the Soviet Union in the sixties was a mess with all the wrong people holding the levers of power. And yet, inside the machine, there were humans too: sometimes noble, often seriously brilliant. Reading Black Sun is like stepping into a time machine and setting the dial for Soviet Russia, 1961. -- JOHN SWEENEY The most exciting thriller or mystery story debut this year . . . a cold war whodunnit . . . an absolutely gripping novel by one who knows Russia well and evokes a horrifyingly convincing Soviet Union. -- A. N. Wilson * THE TABLET 'Books of the Year' * This thrilling and suspenseful and original thriller of murder and power is a compelling voyage into the darkest secret city of the soviet nuclear project by an expert on all of Russian life. -- SIMON SEBAG MONTEFIORE Enthralling . . . Black Sun propels Matthews straight into the first division of thriller writers. -- Adam LeBor * FINANCIAL TIMES * A stunning debut. Matthews writes enviably well and knows Soviet Russia inside-out. Fantastic. -- CHARLES CUMMING Fact and fiction combine to keep the pages turning in this impressive debut thriller. -- Antonia Senior * THE TIMES 'Best Historical Fiction of the Year' * One of the best thrillers of recent years . . . a glorious book, a tour-de-force. It drips with authenticity from every page . . . a page-turning, thumping good read. -- DAVID YOUNG, bestselling author of Stasi Child An outstanding first novel . . . Matthews writes superbly. * SUNDAY TIMES 'Crime Book of the Month' * There are some authors who have gone out into the world to observe the good, the bad and the ugly. Owen Matthews is such a novelist. Black Sun is fascinating and has fearsome authenticity. -- FREDERICK FORSYTH A stunning debut thriller . . . ferocious, authentic and utterly terrifying . . . absolutely riveting. -- Geoffrey Wansell * DAILY MAIL *

OWEN MATTHEWS worked as a war correspondent in Bosnia, Lebanon, Afghanistan, Chechnya, Iraq and Ukraine and was Newsweek magazine's bureau chief in Moscow from 2006 until 2016. He has written several works of non-fiction including the critically-acclaimed Stalin's Children and An Impeccable Spy. Black Sun is his first novel. He lives in Moscow and Oxford.