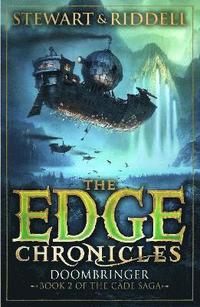 av Chris Riddell, Paul Stewart
Häftad Engelska, 2015-04-01
109
Köp
Spara som favorit
Skickas inom 7-10 vardagar.
Fri frakt inom Sverige över 159 kr för privatpersoner.
Finns även som
Visa alla 1 format & utgåvor
Cade Quarter is building a new life for himself in the wild Farrow Ridges, miles away from civilization - and from the enemies who are seeking him. But when his new home is threatened by villainous mire-pearlers, Cade and his friends must find a way to defend the land they love, and the wise and beautiful secrets it holds. Doombringer is the second book of the Cade Saga - fourth trilogy in The Edge Chronicles, the internationally best-selling fantasy series, which has featured on the UK and the New York Times best-seller lists and sold more than 3 million copies. There are now 13 titles and four trilogies in the series, but each book is a stand-alone adventure, so you can read The Edge Chronicles in any order you choose.
Visa hela texten

Glorious and deserves a huge 5/5. * Patrick, Reading School, Year 10 * Once again an excellent book from the best-selling tandem of Paul Stewart and Chris Riddell. * Goodreads *

Paul Stewart (Author) Paul Stewart is a highly regarded author of books for young readers - everything from picture books to football stories, fantasy and horror. Together with Chris Riddell, he is co-creator of the bestselling Edge Chronicles series, which has sold over three million books and is now available in over thirty languages. They are also co-creators of the Far-Flung Adventure series, which includes Fergus Crane, Gold Smarties Prize Winner, Corby Flood and Hugo Pepper, Silver Nestle Prize Winners, and the Barnaby Grimes Series. Chris Riddell (Author) Chris Riddell is an acclaimed artist of children's books and a political cartoonist for the Observer. Amongst other titles, Chris illustrates the Ottoline young fiction series and the Goth Girl series, as well as working closely with Paul Stewart on the Edge Chronicles and Wyrmeweald. Children's Laureate from 2015-2017, he has won many awards for his work, including the Nestle Gold Award, the UNESCO Award for Something Else and the rare honour of three Kate Greenaway Medals.