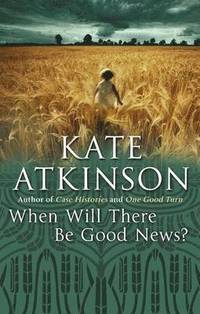 When Will There Be Good News?

av Kate Atkinson
(1 röst)
Häftad Engelska, 2009-01-02
96
Köp
Spara som favorit
Skickas inom 5-8 vardagar.
Gratis frakt inom Sverige över 159 kr för privatpersoner.
Finns även som
Visa alla 1 format & utgåvor
The third Jackson Brodie novel, winner of Richard & Judy's Best Read: literary crime from the number-one bestselling author of Big Sky and Transcription. 'An exhilarating read. Her wry humour, sharp eye for the quirks of human behaviour and subtle characterisation are a constant joy' Daily Mail In a quiet corner of rural Devon, a six-year-old girl witnesses an appalling crime. Thirty years later the man convicted of the crime is released from prison. In Edinburgh, sixteen-year-old Reggie, wise beyond her years, works as a nanny for a G.P. But her employer has disappeared with her baby, and Reggie seems to be the only person who is worried. Across town, Detective Chief Inspector Louise Monroe is also looking for a missing person, unaware that hurtling towards her is a former acquaintance - Jackson Brodie - himself on a journey that becomes fatally interrupted.
Visa hela texten

By becoming a crime writer she has - in a way that other "literary" types may wish to note - become a better literary writer than ever: funny, bracingly intelligent and delightfully prickly . . . Kate Atkinson is that rarest of beasts, a genuinely surprising novelist * Guardian * Atkinson's genius is her sure control of plot . . . immaculately - even lovingly - paced, and it is a measure of Atkinson's talent that I read it in one sitting. * Sunday Telegraph * 'An exhilarating read. Her wry humour, sharp eye for the quirks of human behaviour and subtle characterisation are a constant joy...with writing of this quality, there is good news on every page' * Daily Mail * An intricately crafted tale of coincidence and fate, love and longing. From the get-go, Atkinson's pitch-perfect ear for dialogue is apparent ' * Independent * 'A masterclass in plot daring, an extended riff on coincidence, and a piercing evocation of love and loss in many forms. One of the fiercest, funniest, most affecting reads of the year' * Guardian * 'Atkinson's world is full of bizarre accidents and meaningless murders, but she celebrates love, laughter and literature so wholeheartedly that I cheered aloud...Everybody should read her' * Telegraph * 'One of those rare fictions that defies categorisation.....contains startling moments of truth, and its insights into human nature are simply superb' * Sunday Times * The good news, of course, is that here is another Jackson Brodie thriller from the brilliant Kate Atkinson. The even better news is that . . . it's the most enthralling to date * Mirror * 'Another faultless display by Kate Atkinson . . . Like the other titles in the Jackson Brodie series, this one plays with the tenets of the crime genre without ever sacrificing the essence of wit and nuance which make Atkinson's novels such jubilant reads' * Scotland on Sunday * 'Unputdownable, Atkinson's books are like Agatha Christie mysteries that have burst at the seams-they're taut and intricate but also messy and funny and full of life' * Time *

Kate Atkinson is one of the world's foremost novelists. She won the Costa Book of the Year prize with her first novel, Behind the Scenes at the Museum. Her three critically lauded and prizewinning novels set around World War II are Life After Life, A God in Ruins (both winners of the Costa Novel Award), and Transcription. She was appointed MBE for services to literature in 2011. Her bestselling literary crime novels featuring former detective Jackson Brodie, Case Histories, One Good Turn, When Will There Be Good News? and Started Early, Took My Dog became a BBC television series starring Jason Isaacs. Jackson Brodie returns in her new novel Big Sky.