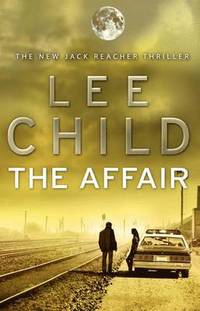 av Lee Child
(4 röster)  |  Läs 1 recension
Häftad Engelska, 2012-03-01
95
Köp
Spara som favorit
Finns även som
Visa alla 1 format & utgåvor
March 1997. A woman has her throat cut behind a bar in Carter Crossing, Mississippi. Just down the road is a big army base.Is the murderer a local guy - or is he a soldier? Jack Reacher, still a major in the military police, is sent in undercover.The county sheriff is a former U.S. Marine - and a stunningly beautiful woman. Her investigation is going nowhere. Is the Pentagon stonewalling her? Or doesn't she really want to find the killer? The adrenaline-pumping, high-voltage action in The Affair is set just six months before the opening of Killing Floor, and it marks a turning point in Reacher's career. If he does what the army wants, will he be able to live with himself? And if he doesn't, will the army be able to live with him? Is this his last case in uniform?
Visa hela texten

"Plenty of action....much more of a whodunit than anything Lee Child has previously written...The gripping plot and breathtaking violence ensure it is difficult to put down." * Evening Standard * "Jack Reacher has long since earned his prominent place in the pantheon of cool,smart-talking American heroes....Shakes up the status quo by delivering the Reacher creation myth...stealthily funny...this book is really about the man himself." -- Janet Maslin * New York Times * "Just when you thought it couldn't possibly get any better, Lee Child pulls Jack Reacher out of another hole and, bang, he produces nothing short of a thriller masterpiece...Here, we get what we've been waiting for...the story of how Reacher became Reacher." -- Henry Sutton * Mirror * "Child on top of his game. It could well be his best book yet...The paradox of Reacher is that he is both a great big grizzly bear of a fighter...and a thinker, both Schwarzenegger and Socrates. Make love and war is his credo." * Independent * "With its revelations and its bonk-fest, it's an unabashed fan-pleaser, but also a timely, reassuring wallow in the undiluted essence of Reacher." * Telegraph *

Lee Child is one of the world's leading thriller writers. He was born in Coventry, raised in Birmingham, and now lives in New York. It is said one of his novels featuring his hero Jack Reacher is sold somewhere in the world every nine seconds. His books consistently achieve the number-one slot on bestseller lists around the world, are published in over one hundred territories, and two blockbusting Jack Reacher movies have been made so far. He is the recipient of many awards, most recently the CWA's Diamond Dagger for a writer of an outstanding body of crime fiction, the International Thriller Writers' ThrillerMaster, and the Theakstons Old Peculier Outstanding Contribution to Crime Fiction Award.