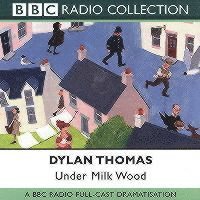 av Dylan Thomas
CD-bok Engelska, 2001-01-01
120
Köp
Spara som favorit
Finns även som
Visa alla 7 format & utgåvor
'To begin at the beginning: it is spring, moonless night in the small town, starless and bible-black...' When Richard Burton breathed the opening words of Under Milk Wood into a microphone, broadcasting history was made. For this 'play for voices' conjures up the intimate dreams and waking lives of the inhabitants of a Welsh seaside village in a remarkable way. It is bawdy and beautiful; its colourful characters lust and love, gossip and fantasise. Through the magic of language, Under Milk Wood creates a rich modern pastoral which, once heard, touches the listener with its poetry and haunts the imagination for ever. This radio drama is the completed version broadcast in 1963 which includes several passages that were omitted from the first recording in 1954. 2 CDs. 1 hr 41 mins.
Visa hela texten

Dylan Marlais Thomas was born in Swansea on 27 October 1914 and educated at Swansea Grammar School where his father was an English master. He did not learn Welsh although his language has often been described as Welsh written in English. He began writing poetry while a student and continued writing in his spare time when, after leaving school in 1931, he worked as a reporter for the South Wales Daily Post in Swansea. He moved to London in 1934, and in December of that year his first volume of verse, 18 Poems, was published to critical acclaim. He then embarked on a career as a journalist and scriptwriter. As his reputation as a poet grew, so too did his personal popularity and he became well known for his exuberant and charismatic personality. He married Caitlin Macnamara in 1937 and they settled in Laugharne, Wales which was the inspiration for the town in Under Milk Wood. He returned there after many travels in 1949. During the Second World War, he was declared unfit for service and stayed in London, working as a scriptwriter and broadcaster for Strand Films and the BBC. All the while he wrote his own material and published two volumes of short stories, The Map of Love in 1939 and Portrait of the Artist as a Young Dog in 1940. With the publication of New Poems in 1943 and two further volumes, Death and Entrances (1946) and In Country Sleep (1953), his reputation was established. His Collected Poems 1934-1952, published in 1952, was a critical and popular success. In the 1950s, Thomas conducted several reading tours of his work in the United States. They drew large audiences and confirmed his reputation as a charismatic and lyrical poet. In 1953, he returned for a fourth visit to America despite poor health and exhaustion. Here he revised his play for voices Under Milk Wood which he had worked on intermittently for ten years. It had its first reading on stage on 14 May 1953 in New York. The first BBC broadcast was in 1954, although several sections were omitted. In 1963, the producer revisited the project and recorded the full and complete play. Dylan Thomas died in New York on 9 November 1953 and is buried in Laugharne. He and Caitlin had three children.