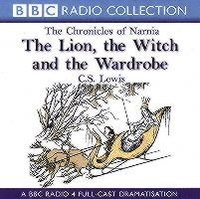 Lion, The Witch And The Wardrobe

av C S Lewis
CD-bok Engelska, 2000-01-01
139
Köp
Spara som favorit
When Lucy comes across the old wardrobe standing alone in the spare room, she thinks she has found a good place for hide and seek. But then she tumbles headlong into a magical world of fauns, dwarves and giants, of animals that talk and horses that fly - the land of Narnia. It is so extraordinary that at first her brothers and sister don't believe it can be real. Soon, though, Peter, Edmund and Susan find Narnia too and the adventures really begin.Together they must battle against the evil White Witch to break her cruel grip on Narnia, a land she has cast in perpetual winter, without Christmas. Only one thing can hold fast against such wickedness: the mighty Aslan. The excitement which C.S. Lewis must have felt in creating this enchanted world is conjured up once again in this thrilling dramatisation of one of the best stories ever told. 2 CDs. 1 hr 55 mins.
Visa hela texten

C.S. Lewis (Author) C.S. Lewis was born in Belfast in 1898. In 1917 he went to Oxford University, but his studies were interrupted by the First World War, from which he was sent home wounded. One of his friends at Oxford was J.R.R. Tolkien. The Lion, the Witch and the Wardrobe was published in 1950. Fascinated by the difference in time between our own world and Narnia, Lewis wrote some of the books in a different order to the events which they portrayed. An example of this is The Magician's Nephew, which details the early history of Narnia and is intended to be read before the others. C.S. Lewis died in 1963.