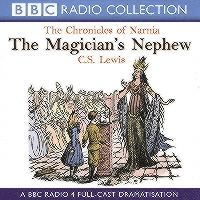 av C S Lewis
CD-bok Engelska, 2000-01-01
139
Köp
Spara som favorit
Finns även som
Visa alla 3 format & utgåvor
Polly Plummer and her next-door neighbour Digory are exploring one wet afternoon when the accidental discovery of some magic rings sets them off on the most exciting and dangerous journey of their life. They fall through magic pools to the ruined city of Charn where Digory awakens the terrifying figure of Jadis, the last Queen. But with true evil comes true goodness, as the children discover when they come face to face with the mighty lion Aslan. Soon the children's Uncle Andrew, along with an unwitting cabbie and footman, has joined them - and together they witness the lion Aslan's creation of a wondrous new world... So begins the universally loved and acclaimed series of stories in which good and evil do battle in the spellbinding, magical land of Narnia. 2 CDs. 1 hr 55 mins.
Visa hela texten

C.S. Lewis was born in Belfast in 1898. In 1917 he went to Oxford University, but his studies were interrupted by the First World War, from which he was sent home wounded. One of his friends at Oxford was J.R.R. Tolkien. The Lion, the Witch and the Wardrobe was published in 1950. Fascinated by the difference in time between our own world and Narnia, Lewis wrote some of the books in a different order to the events which they portrayed. An example of this is The Magician's Nephew, which details the early history of Narnia and is intended to be read before the others. C.S. Lewis died in 1963.