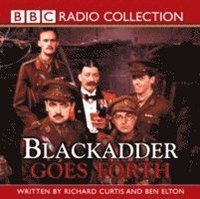 av Richard Curtis, Ben Elton
CD-bok Engelska, 2003-01-01
189
Köp
Spara som favorit
With a yah boo sucks to you, Fritzy, hot tiddly tumble, it's off to the Western Front in 1917. Captain Blackadder, hero of Mbot Gorge, joined the British Army when it was little more than a travel agency for gentlemen with an abnormally high sex drive. Now he finds himself crammed into a sewer, twenty yards from a lot of heavily armed people who want to kill him. Worse still, he takes his orders from two homicidal maniacs, one who called the Charge of the Light Brigade 'a victory for common sense' and the other called Darling. Ever ready with a cunning plan, Blackadder actively avoids duty by taking up art, shooting the General's favourite bird, probing the hospital nurse and learning to fly. But will his attempts to push off be enough when the Big Push comes? Rowan Atkinson stars as Captain Blackadder in Richard Curtis' and Ben Elton's award-winning comedy. This collection includes the following episodes: 'Captain Cook', 'Corporal Punishment', 'Major Star', 'Private Plane', 'General Hospital' and 'Goodbyeee'. 3 CDs. 2 hrs 52 mins.
Visa hela texten

Ben Elton's multi-award winning career as both performer and writer encompasses some of the most memorable and incisive comedy of the past thirty-five years. In addition to his hugely influential work as a stand-up comic, he was co-writer of TV hits The Young Ones and Blackadder and sole creator of The Thin Blue Line and Upstart Crow. He has written fifteen major bestsellers, including Stark, Popcorn, Inconceivable, Dead Famous, High Society, Two Brothers and Time and Time Again, three West End plays and three musicals, including global phenomenon We Will Rock You. He has written and directed two feature films, Maybe Baby and Three Summers. He is married and has three children. Richard Curtis is a British screenwriter, actor, film director and music producer. Among his screenwriting credits are Four Weddings and a Funeral, Notting Hill and Love Actually, whilst for television he created and wrote Blackadder, Mr. Bean and The Vicar of Dibley. He created the first Black Adder series with Rowan Atkinson, before going on to write subsequent series with Ben Elton. Rowan Atkinson, CBE is a comedian and actor, well known for his roles in Blackadder and Mr Bean. His first starring role was in the BBC radio comedy series The Atkinson People, which he co-wrote with Richard Curtis. He subsequently starred in Not the Nine O'Clock News, which launched his career as well as those of his co-stars Mel Smith, Griff Rhys-Jones and Pamela Stephenson. Other television credits include playing the title role in ITV's Maigret, while among his film credits are Bean and Johnny English. Tony Robinson is best known as 'Baldrick' from the famous Blackadder series. On top of his acting credentials, Tony is also a successful TV presenter and is currently presenting Channel 4's Time Team. He has also written several children's non fiction books, notably for Hodder, and lives in west London.