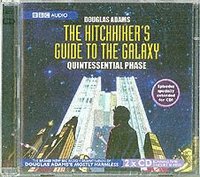 Hitchhiker's Guide To The Galaxy

av Douglas Adams
CD-bok Engelska, 2005-01-01
149
Köp
Spara som favorit
While frequent flyer Arthur Dent searches the universe for his lost love, Ford Prefect discovers a disturbing blast from the past at The Hitchhiker's Guide HQ. Meanwhile, on one of many versions of Earth, a blonder, more American Trillian gets tangled up with a party of lost aliens having an identity crisis. And, just when Arthur thinks he has found his true vocation on the backwater planet of Lamuella, the original Trillian turns up with more than a little spanner in the works. A stolen ship, a dramatic stampede and a new and sinister Guide lead to a race to save the Earth again. But this time, will they succeed? Simon Jones returns as Arthur, Geoffrey McGivern as Ford, Mark Wing-Davey as Zaphod Beeblebrox, Susan Sheridan as Trillian, Sandra Dickinson as Tricia McMillian, and Stephen Moore as Marvin. William Franklyn is the Book, alongside a host of famous guest stars. This extended edition features 30 minutes of material not heard on BBC Radio 4. 2 CDs. 2 hrs 30 mins.
Visa hela texten

"This production will make you grin from beginning to end." AudioFile

DOUGLAS ADAMS was born in Cambridge in March 1952. He is best known as the creator of The Hitch Hiker's Guide to the Galaxy, which started life as a BBC Radio 4 series. The book went on to be a No. 1 bestseller. He followed this success with The Restaurant at the End of the Universe (1980); Life, The Universe and Everything (1982); So Long and Thanks for all the Fish (1984); Mostly Harmless (1992) and many more. He sold over 15 million books in the UK, the US and Australia. Douglas died unexpectedly in May 2001 at the age of 49.