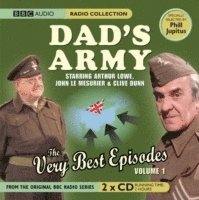 av Jimmy Perry
(1 röst)
CD-bok Engelska, 2006-01-01
142
Köp
Spara som favorit
Diehard Dad's Army fan Phill Jupitus has selected four of his favourite episodes from the sitcom that captured the heart of a nation. As Jupitus says, 'There are episodes here you will be familiar with and some you may never have heard, but what I can promise is that they are all achingly funny.' 'The Man and the Hour' is the first ever episode of the series, in which Mainwaring barks out, 'Come on Adolf, we're ready for you!'; 'My British Buddy' finds Mollie Sugden guest starring as a Walmington inhabitant besotted with the new GIs in town; 'Time on My Hands' finds a German airman snagged by his parachute on the town hall clock; and in 'A Soldier's Farewell' Mainwaring dreams he is Napoleon at Waterloo, with Wilson an elegant Duke of Wellington... Providing stalwart support to the stars are John Laurie, James Beck, Arnold Ridley, Ian Lavender and Bill Pertwee. 2 CDs. 1 hr 53 mins.
Visa hela texten

Jimmy Perry was born in London in 1923. By the age of 25 he had been a member of the Home Guard, called up into the regular forces and sent to Burma with the Royal Artillery, travelled the Indian subcontinent, entertaining the troops, been a Red Coat at Butlins and studied at the Royal Academy of Dramatic Arts - the experiences from all of which went into the creation of his much-loved comedies which include Dad's Army, It Ain't Half Hot, Mum and Hi-De-Hi! Jimmy has won numerous awards throughout his career including the Writers' Guild Best Comedy Script three years running from 1969 to 1971, the Writers' Guild Lifetime Achievement Award in 1995 and the Comic Heritage award in 1998. He received the OBE in 1978 and is still entertaining the nation with his one-man show.