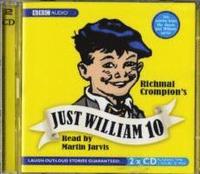 CD-bok Engelska
146
Köp
Spara som favorit
The adventures of that irrepressible and ageless schoolboy William Brown have been delighting both young and old for decades. In this welcome new collection, performed by 'the wizard of the talking book' Martin Jarvis, the heroically optimistic William and his faithful Outlaws embark on more intrepid adventures, and once again find themselves pitted against the fearsome wiles of their lisping nemesis, Violet Elizabeth Bott. The stories include: 'William and the Chinese God'; 'William and the League of Perfect Love'; 'Fireworks Strictly Prohibited'; 'William the Psychiatrist'; 'William Joins the Waits'; 'Violet Elizabeth Takes Control'; 'William - The Dear Little Boysie'; 'William's Brilliant Plan'; 'The Outlaws and Aunt Jo' and 'Violet Elizabeth's Special Party'. 'There's nothing to touch them' -Independent on Sunday. 2 CDs. 2 hrs 30 mins.
Visa hela texten

Richmal Crompton was born in Bury, Lancashire, in 1890. She was educated at St. Elphin's School and studied Classics at Royal Holloway College before becoming a schoolmistress. However, her teaching career was cut short by an attack of polio in 1923, which confined her to a wheelchair. She became a full-time author, and wrote over 40 books for adults, but she is best known for her hugely popular Just William books. William first appeared in 1919 in a short story for Home Magazine. The first collection featuring him was published in 1922, and he went on to star in 38 further books (the final one, William the Lawless, was published posthumously in 1970). They have sold over 12 million copies in the UK alone, been translated into nine languages and remain enduringly popular today.