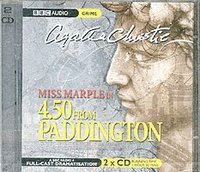 av Agatha Christie
CD-bok Engelska, 2005-01-01
149
Köp
Spara som favorit
Elspeth McGillicuddy is down from Scotland for a holiday and boards the 4:50 train from Paddington station to visit her friend, Miss Marple. During the journey, another train pulls alongside, and through the window Mrs McGillicuddy witnesses a tall, dark man strangling a blonde woman. She reports what she has seen, yet no one takes any notice. There is no report of any murder, no dead woman found on any train, and the police have no record of any persons reported missing that match the description. Only Miss Marple believes her account, and realising that the body must have been thrown off the train, with the help of maps and train timetables she pinpoints the exact spot where the body must be. With the help of her young friend Lucy Eyelesbarrow, she goes about the tricky task of uncovering a murder - and a cunning murderer... Agatha Christie's intricate mystery is dramatised with a full cast including Ian Lavender as Inspector Craddock, Joan Sims as Mrs McGillicuddy and Susannah Harker as Lucy Eyelesbarrow. 2 CDs. 1 hr 30 mins.
Visa hela texten

Agatha Christie, the acknowledged 'Queen of Crime' (The Observer) was born in Torquay in 1890. During the First World War she worked as a hospital dispenser, and it was here that she gleaned the working knowledge of various poisons that was to prove so useful in her detective stories. Her first novel was The Mysterious Affair at Styles, which introduced Hercule Poirot to the world. This was published in 1920 (although in fact she had written it during the war) and was followed over the next six years by four more detective novels and a short story collection. However, it was not until the publication of The Murder of Roger Ackroyd that Agatha Christie's reputation was firmly established. This novel, with its complex plot and genuinely shocking conclusion, attracted considerable public attention and has since been acknowledged by many experts as a masterpiece. In 1930 the sharp-witted spinster sleuth Miss Marple made her first appearance in The Murder at the Vicarage. In all, Agatha Christie published over 80 novels and short story collections. The brilliance of Christie's plots, and her enduring appeal, have led to several dramatisations of her work on radio, television and film. In 1930 she was one of a number of crime writers asked to contribute a chapter to a mystery, Behind the Screen, that was broadcast on BBC radio on 21st June that year. More recently, June Whitfield portrayed Miss Marple on BBC Radio 4, whilst John Moffat starred as Hercule Poirot. On screen, Peter Ustinov, David Suchet, Margaret Rutherford, Joan Hickson, Geraldine McEwan and Julia McKenzie have all memorably played Agatha Christie's famous sleuths. As her play The Mousetrap (the longest-running play in the history of theatre) testifies, Agatha Christie's detective stories are likely to appeal for a long time to come. Agatha Christie was awarded a CBE in 1956 and was made a Dame of the British Empire in 1971. She died in 1976. As a long-serving member of the world-famous Carry On team, Joan Sims starred in twenty- four of the classic comedies. She has also appeared in many acclaimed productions in the West End and her film credits include The Belles of St Trinian's with Alastair Sim, The Naked Truth with Peter Sellers, Davy, Trouble in Store, the last ever Ealing Comedy, with Norman Wisdom, and five Doctor films opposite Dirk Bogarde and Leslie Phillips. Joan has over 100 TV credits to her name, most recently she appeared in the acclaimed BBC TV production of Martin Chuzzlewit. June Whitfield is one of Britain's most respected actresses. She now lives in London. And June Whitfield is her long awaited autobiography.