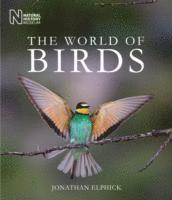 The World of Birds

av Jonathan Elphick
(2 röster)
Inbunden Engelska, 2014-08-07
389
Köp
Spara som favorit
Skickas inom 3-6 vardagar.
Fri frakt inom Sverige för privatpersoner.
Finns även som
Visa alla 1 format & utgåvor
The World of Birds is a groundbreaking guide to every aspect of bird life and a complete survey of the world's orders and families of birds. Written by eminent natural history expert Jonathan Elphick and with special photography from award-winning wildlife photographer David Tipling, it is the ultimate companion for birders, wildlife enthusiasts and anyone wanting an accessible and accurate acccount of these amazing creatures. The book begins by examining the evolution of birds since the age of the dinosaurs. It then explores in greater detail each of the significant elements of bird life: bird biology including anatomy, physiology, the brain and senses, plumage, calls and songs; flight techniques and styles; food and feeding; bird lifestyles and social relationships; breeding, growth and development; bird geography and habitats; and migration. The second part of the book provides a comprehensive survey of the world's birds which includes an introduction to the 32 orders and a detailed account and concise fact panel for every one of the 196 families. A glossary, further reading list and two indexes ensure easy reference.With its clear, lively text and fact boxes, and sumptuous illustrations throughout - over 1,000 photographs, maps and diagrams - The World of Birds is a book everyone interested in birds should own.
Visa hela texten

"...a brilliantly detailed, wide-ranging guide to every aspect of the way birds live their lives...Whatever you want to know about bird behaviour, distribution, physiology or classification, you can find it somewhere in these 600 pages." The Guardian; "As one might expect from Elphick, there is a platinum standard to the book's accuracy ... it is also bang up to date ... this is a wonderfully authoritative, but also carefully compressed, statement on all things avian. My guess is that it will be a baseline reference for years to come." Mark Cocker, Birdwatch; "weighty this book may be, but Elphick displays a light touch, his unfussy writing clarifying difficult concepts ... encyclopaedic in both ambition and achievement, and a tome to be treasured." BBC Wildlife magazine; "this book reminds me of how even the most familiar of birds are full of surprises ... beautiful, inspiring and concise." New Scientist

Bloggat om The World of Birds

Jonathan Elphick, BSc, FZS, FLS, is a highly regarded wildlife writer, editor, consultant, lecturer and broadcaster, specializing in ornithology. During a career spanning over 40 years, he has worked on many books, including spending twelve years as specialist researcher on Birds Britannica and Birds & People. He has also written a variety of titles, such as the bestseller Birdsong, Birds: The Art of Ornithology and the award-winning Birdwatcher's Handbook, and was a contributing editor on Natural History Museum Atlas of Bird Migration. David Tipling has worked as a freelance wildlife photographer since 1992. He is one of the most widely published wildlife photographers in the world and his pictures have been used on hundreds of book and magazine covers, and regularly on TV. He has written and been the commissioned photographer for more than 40 books on birds and wildlife photography that include the best selling RSPB Guide to Digital Wildlife Photography. He has received the European Nature Photographer of the Year Documentary Award for his work, and has multiple wins in the prestigious Wildlife Photographer of the Year competition.