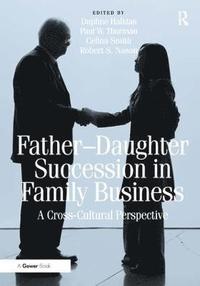 av Mr Paul W Thurman, Robert S Nason, Dr Daphne Halkias, Celina Smith
Inbunden Engelska, 2011-12-28
1449
Köp
Spara som favorit
Skickas inom 5-8 vardagar.
Fri frakt inom Sverige för privatpersoner.
Finns även som
Visa alla 3 format & utgåvor
To whom does a father, retiring from his life as a successful entrepreneur, pass control of the business he has built? Once it would always have been his eldest son, but increasingly women are becoming involved in family firms having risen to positions of influence and leadership. Using revealing case studies from the daughters who succeeded their entrepreneur fathers in a wide variety of challenging situations, cultures and continents, Father-Daughter Succession in Family Business discusses the changes which have led to daughters gaining influence in more and more family businesses. It looks at the tensions this succession can produce between old notions of how men and women should behave, and the new style of leadership that often comes about when a woman takes the helm. This book will help consultants, business educators, and researchers, as well as those who are themselves involved in significant family managed enterprises to better understand why it can no longer be assumed in any part of the World that the first born son will take over the reins of the family business.
Visa hela texten

This unique compendium of case studies on father-daughter succession in family enterprises sheds light on the varied pathways adopted to negotiate this key transition in the life cycle of families and their firms. With cases from twenty five countries around the globe and a large spectrum of industries, this pioneering work is a must read for all entrepreneurial family enterprise owners and progressive scholars who want to keep pace with the changing world of women leaders taking over from their fathers. - Dr Pramodita Sharma, Editor, Family Business Review, Director, Global STEP Project for Family Enterprising, Babson College, Massachusetts, USA These cross-cultural cases are such an important contribution to the family business literature; it is still relatively rare that research on succession takes cultural variables as well as gender into account. Take an enlightening voyage of discovery, tap into the knowledge generated by the dedicated authors in this volume and the families in business around the world who collaborated with them. Congratulations to the editors and the authors for the excellent job they have done bringing this important topic to life through these cases. - Dr Colette Dumas, Professor of Management and Entrepreneurship, Director of the Center for Innovation and Change Leadership, Sawyer Business School, Suffolk University, Massachusetts, USA

Daphne Halkias, PhD. is Senior Research Fellow, The Center for Youth and Family Enterprise (CYFE) at University of Bergamo in Italy; Research Affiliate at the Institute for Social Sciences at Cornell University and Affiliate, Institute of Coaching, McLean Hospital at Harvard Medical School, Massachusetts, USA Paul W. Thurman, MBA is Clinical Professor, School of International and Public Affairs, Mailman School of Public Health and Columbia Business School, Columbia University in New York, USA . Celina Smith, PhD. is Assistant Professor of Entrepreneurship at EMLYON Business School in Lyon, France and a Visiting Fellow at Imperial College, UK. Robert Nason, MBA is Global Program Manager of the STEP Project for Family Enterprising at Babson College, Massachusetts, USA and a Board Member of the New England Chapter of the Family Firm Institute.