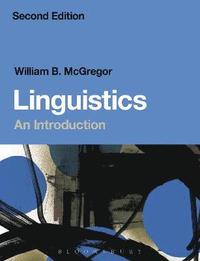 av William B McGregor
(1 röst)
Häftad Engelska, 2015-02-01
309
Köp
Spara som favorit
Skickas inom 7-10 vardagar.
Fri frakt inom Sverige för privatpersoner.
Finns även som
Visa alla 1 format & utgåvor
This is the new edition of Linguistics: An Introduction. It is a bestselling introductory textbook for all students of linguistics and language studies. This reworked edition features: -new chapters on sign languages, writing, and text and discourse -coverage of writing in electronic media -revised and updated chapters on languages of the world and psycholinguistics Firmly based around taught courses and catering to student needs, it addresses all the topics that a student will need in their study of language. With key terms, further reading, questions at the end of each chapter, exercises and key paragraphs in stand-out boxes, this is a firmly pedagogic text that takes difficult concepts and explains them in an easy to understand way. It features examples taken from a range of languages across the world. Global in its scope and comprehensive in its coverage, this is the textbook of choice for linguistics students. The book comes with a large Companion Website, also extensively revised and expanded. For lecturers and instructors, a comprehensive Answer Book is also available to go along with the questions throughout the chapters.
Visa hela texten

[This book] encompasses the latest research results published by the most prominent linguists from the whole world ... The pedagogical merits make McGregor's Linguistics: An Introduction a special publication ... I wholeheartedly recommend the book to both teachers and students of language. Personally, I am going to take advantage of all the merits this textbook offers in my classroom with students of English philology. * LINGUIST List * William McGregor's new textbook is an excellent introduction to linguistics. It is clear, precise and readable, comprehensible and comprehensive, and it is eminently usable as both a core course text as well as a reference work. It also does not neglect the extensions and applications of linguistics in the real world. This book is likely to become the benchmark for linguistics texts in the next few years. * Peter Stockwell, Professor of Literary Linguistics, University of Nottingham, UK (of the first edition) * This book has set a new benchmark for linguistics textbooks. I will definitely be adding Linguistics: An Introduction to the core texts on relevant syllabi in my own teaching * British Association of Applied Linguistics (of the first edition) * McGregor's prose is clear... his explanations are articulate enough to convey the essential content, while devoid of tortuous,off-putting syntax... the thirteen chapters contain plenty of linguistic examplesand clever illustrations [and] the text is pedagogically friendly. McGregor hasdelivered a concise compendium, uncluttered and accessible, pedagogically wellthought through, and innovative in its theoretical approach to presenting thematerial. Instructors, students, and language buffs alike are encouraged togive it a gander. * American Speech, volume 84, number 3 (of the first edition) * [this book] is admirable for the breadth, depth and clarity of its coverage, encompassing a wide range of topics in a generally lucid and succinct fashion and elaborating on many areas of interest that are poorly covered in other introductory texts. * Functions of Language, Volume 18, No.1 (of the first edition) * McGregor's Introduction is a very well-balanced and informative introductory text. It is designed to give the student a sense of being able to think clearly about language, and to engage in the study of language in any of its diverse manifestations -- always in a perspective in which (as McGregor says) "meaning and use play absolutely central roles". The book will make it clear to students what it means to say that linguistics is the science of language. * M. A. K. Halliday, Emeritus Professor of Linguistics, University of Sydney, Australia (of the first edition) * At last - an introduction to the study of language that is neither theory-neutral nor generative, but one that is cognitivist and functional. It highlights the links of linguistics with psychology, neuroscience and biological evolutionary theory. In addition it is engaging, pedagogically well thought through, lucidly written and nicely presented. The perfect book for beginners! * Eva Eppler, Senior Lecturer in English Language & Linguistics, Roehampton University, UK (of the first edition) * Linguistics: An Introduction provides a fresh yet traditional functionalist perspective on some of the core issues in modern linguistics, occupying an intermediate position between existing introductory workbooks and textbooks. Students will appreciate the no-nonsense focus on basic facts and concepts, as well as the frequent interjection of practical suggestions for how to study, learn, and conduct linguistic analysis. Professors will enjoy the steady infusion of examples from Australian and other lesser-known languages of the world, as well as the stimulating new questions at the end of each chapter. Linguistics is a textbook suitable for students all around the world -- and Americans will find much in this book to get their linguistic juices flowing. * Bert Vaux, University Lecturer

William B. McGregor is a Professor at the University of Aarhus, Denmark. He is a fellow of the Australian Academy of Humanities.