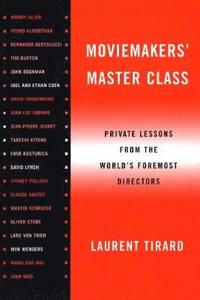 av Laurent Tirard
Häftad Engelska, 2002-12-01
199
Köp
Spara som favorit
Skickas inom 3-6 vardagar.
Fri frakt inom Sverige för privatpersoner.
Finns även som
Visa alla 1 format & utgåvor
From Scorsese and Lynch to Wenders and Godard: interviews with twenty of the world's greatest directors on how they make films - and why. Each great film-maker has a secret method to his moviemaking - and each is different. In Moviemakers' Masterclass, Laurent Tirard talks to an illustrious collection of today's greatest directors to get to the core of their approach to cinema. The results shed a unique light upon the mysteries of the directorial process. Martin Scorsese, we learn, likes setting up each shot very precisely in advance. Lars von Trier, on the other hand, refuses to think about a set-up until the day of filming. And Bernardo Bertolucci tries to dream his shots the night before . . . Other directors featured include Woody Allen, Pedro Almodovar, Tim Burton, the Coen brothers, Jean-Pierre Jeunet and Wong Kar-Wai.
Visa hela texten

Laurent Tirard was born in 1967. He studied film-making at New York University, from which he graduated with honours in 1990. After a year as a script reader for the Warner Bros. Studio in Los Angeles, he became a journalist for the French film magazine Studio. There, over the course of seven years, he screened and reviewed more than a hundred films a year. He also had the opportunity to interview all the great directors of the day, engaging them in lengthy discussions on the most practical aspects of film-making for a series called 'Lessons in Cinema'. For the last four years he has put all his lessons into practice, first as a screenwriter on French feature films and television movies, then as a director of two short films, Reliable Sources and Tomorrow is Another Day. The first received the 1999 Panavision Award at the Avignon/New York Film Festival, the second was selected for the 2000 Telluride Film Festival. Laurent Tirard is currently working on his first feature film as a director. He lives in Paris with his wife and son.