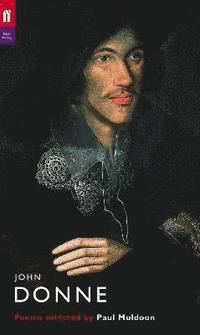 av John Donne, Paul Muldoon
Häftad Engelska, 2008-05-01
85
Köp
Spara som favorit
Skickas inom 5-8 vardagar.
Fri frakt inom Sverige över 159 kr för privatpersoner.
Finns även som
Visa alla 1 format & utgåvor
John Donne (1572-1631) forfeited his Parliamentary seat and was briefly imprisoned when his secret marriage to Ann More was uncovered in 1601. He spent the subsequent decade in poverty, trying to rehabilitate his reputation. He entered the Church in 1615, and become Dean of St Paul's. His first volume of poetry was published posthumously in 1633. In this series, a contemporary poet selects and introduces a poet of the past. By their choice of poems and by the personal and critical reactions they express in their prefaces, the editors offer insights into their own work as well as providing an accessible and passionate introduction to some of the greatest poets of our literature.
Visa hela texten

"'Faber has a poetry list worth bragging about. What other publisher could conjure up a series like this?' The Times"

Paul Muldoon was born in County Armagh in 1951. He read English at Queen's University, Belfast, and published his first collection of poems, New Weather, in 1973. He is the author of ten books of poetry, including Moy Sand and Gravel (2002), for which he received the Pulitzer Prize for Poetry, and Horse Latitudes (2006). A Fellow of the Royal Society of Literature, Paul Muldoon was given an American Academy of Arts and Letters award in 1996. Other recent awards include the 1994 T. S. Eliot Prize, the 1997 Irish Times Poetry Prize, and the 2003 Griffin Prize.