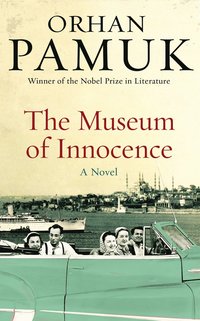 The Museum of Innocence

av Orhan Pamuk
Häftad Engelska, 2010-06-03
97
Köp
Spara som favorit
Skickas inom 7-10 vardagar.
Fri frakt inom Sverige över 159 kr för privatpersoner.
Kan levereras innan jul!
Finns även som
Visa alla 4 format & utgåvor
The Museum of Innocence - set in Istanbul between 1975 and today - tells the story of Kemal, the son of one of Istanbul's richest families, and of his obsessive love for a poor and distant relation, the beautiful Fusun, who is a shop-girl in a small boutique. The novel depicts a panoramic view of life in Istanbul as it chronicles this long, obsessive, love affair between Kemal and Fusun; and Pamuk beautifully captures the identity crisis esperienced by Istanbul's upper classes who find themselves caught between traditional and westernised ways of being.
Visa hela texten

Orhan Pamuk is the author of eight novels, the memoir Istanbul, and two works of non-fiction, and is the winner of the 2006 Nobel Prize for Literature. The Swedish Academy praised Pamuk 'who in the quest for the melancholic soul of his native city has discovered new symbols for the clash and interlacing of cultures'. One of Europe's most prominent novelists, his work has been translated into fifty-eight languages.