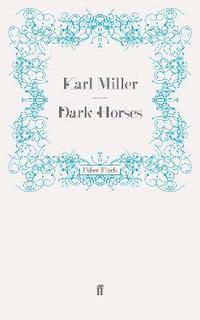 av Karl Miller
Häftad Engelska, 2008-12-11
279
Köp
Spara som favorit
Specialorder (osäker tillgång). Skickas inom 11-20 vardagar.
Fri frakt inom Sverige för privatpersoner.
'This is a book about the magazines I have edited. I have written it in order to describe what they were like, and what literary journalism was like, and to do honour to the writers I worked with.' So begins Karl Miller's understated, droll and lucid retrospect of English post-war literary culture. Dark Horses is the vade mecum and memoir of an eminent literary critic and teacher, who also edited several of the most influential literary magazines of his time, and who founded the most influential literary journal of our time, the London Review of Books. It is the testament of a watchful and undeceived intelligence, of wide and sometimes surprising sympathies, as observant about football as about politics and letters. In its feeling for outsiders as well as its understanding of insiders, Dark Horses fulfills the promises of its title. 'Frank Kermode has written of "the good writing that cannot help eliminating truth from autobiography." Karl Miller comes marvellously close to bringing the two together.' Financial Times 'Miller's prose is elegant, spare and unforced. He has the true art of the memoirist.' Jonathan Bate
Visa hela texten

Karl Miller founded the London Review of Books in 1979, and went on to edit it for many years. Formerly literary editor of the Spectator and the New Statesman, and editor of the Listener, he was also Lord Northcliffe Professor of Modern English Literature at University College London. Among his books are Cockburn's Millennium and Doubles, which Alan Massie has described as two of 'the most illuminating books about Scotland to have appeared in my lifetime.' Karl Miller's vivid portrait of James Hogg, Electric Shepherd, appeared in 2003.