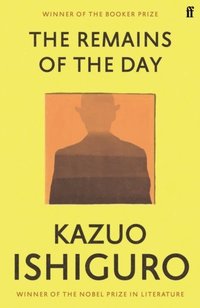 The Remains of the Day

av Kazuo Ishiguro
(12 röster)  |  Läs 4 recensioner
Häftad Engelska, 2010-04-01
107
Köp
Spara som favorit
Finns även som
Visa alla 7 format & utgåvor
*Kazuo Ishiguro's new novel Klara and the Sun is now available* WINNER OF THE BOOKER PRIZE A contemporary classic, The Remains of the Day is Kazuo Ishiguro's beautiful and haunting evocation of life between the wars in a Great English House. In the summer of 1956, Stevens, the ageing butler of Darlington Hall, embarks on a leisurely holiday that will take him deep into the countryside and into his past. 'A triumph . . . This wholly convincing portrait of a human life unweaving before your eyes is inventive and absorbing, by turns funny, absurd and ultimately very moving.' Sunday Times 'A dream of a book: a beguiling comedy of manners that evolves almost magically into a profound and heart-rending study of personality, class and culture.' New York TImes Book Review
Visa hela texten

Kazuo Ishiguro's eight books have won him world-wide renown and many honours, including the Nobel Prize in Literature and the Booker Prize. His work has been translated into over forty languages. The Remains of the Day and Never Let Me Go have each sold in excess of one million copies in Faber editions alone, and both were adapted into highly acclaimed films. His most recent novel, The Buried Giant, was published in 2015, debuting at Number 1 on the Sunday Times bestseller list.