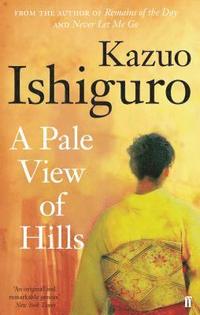 A Pale View of Hills

av Kazuo Ishiguro
(2 röster)  |  Läs 1 recension
Häftad Engelska, 2010-02-25
109
Köp
Spara som favorit
Finns även som
Visa alla 3 format & utgåvor
*Kazuo Ishiguro's new novel Klara and the Sun is now available* From the Nobel Prize-winning author of The Remains of the Day and Never Let Me Go In his highly acclaimed debut, Kazuo Ishiguro tells the story of Etsuko, a Japanese woman now living alone in England, dwelling on the recent suicide of her daughter. Retreating into the past, she finds herself reliving one particular hot summer night in Nagasaki, when she and her friends struggled to rebuild their lives after the war. But then as she recalls her strange friendship with Sachiko - a wealthy woman reduced to vagrancy - the memories take on a disturbing cast.
Visa hela texten

Kazuo Ishiguro's eight books have won him world-wide renown and many honours, including the Nobel Prize in Literature and the Booker Prize. His work has been translated into over forty languages. The Remains of the Dayand Never Let Me Go have each sold in excess of one million copies in Faber editions alone, and both were adapted into highly acclaimed films. His most recent novel, The Buried Giant, was published in 2015, debuting at number 1 on the Sunday Times bestseller list.