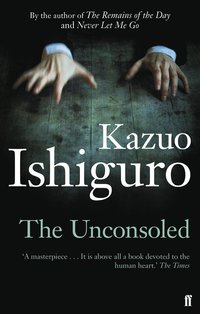 av Kazuo Ishiguro
(2 röster)
Häftad Engelska, 2013-02-07
126
Köp
Spara som favorit
*Kazuo Ishiguro's new novel Klara and the Sun is now available* Ryder, a renowned pianist, arrives in a Central European city he cannot identify for a concert he cannot remember agreeing to give . . . On first publication in 1995, The Unconsoled was met in some quarters with bewilderment and vilification, in others with the highest praise. One commentator asked, 'Has Ishiguro gone for greatness or has he gone mad?' Over the years, this uniquely strange and extraordinary novel about a man whose life has accelerated beyond his control has come to be seen by many as being the key work and a turning point in his career. 'A masterpiece. It is above all a book devoted to the human heart.' Rachel Cusk, The Times 'The most original and remarkable book he has so far produced.' New York Times Book Review 'One of the strangest books in memory.' TLS 'I've never read a book like it. I think it is a masterpiece.' John Carey, The Late Show
Visa hela texten

Kazuo Ishiguro's eight books have won him world-wide renown and many honours, including the Nobel Prize in Literature and the Booker Prize. His work has been translated into over forty languages. The Remains of the Dayand Never Let Me Go have each sold in excess of one million copies in Faber editions alone, and both were adapted into highly acclaimed films. His most recent novel, The Buried Giant, was published in 2015, debuting at number 1 on the Sunday Times bestseller list.