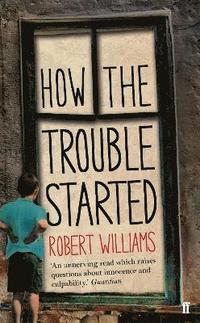 How the Trouble Started

av Robert Williams
Häftad Engelska, 2013-09-05
109
Köp
Spara som favorit
Specialorder (osäker tillgång). Skickas inom 11-20 vardagar.
Gratis frakt inom Sverige över 159 kr för privatpersoner.
Finns även som
Visa alla 1 format & utgåvor
The police were involved over the trouble. They had to be. 'I was just playing,' I told them, but that wasn't enough. They wanted to know what I understood by 'intent'. Donald Bailey is sixteen. He can't forget the trouble that happened when he was eight, when the police were called. His mother can't forget either and even leaving their home town doesn't help. Then Donald befriends Jake, who is eight years old and terrifyingly vulnerable. As he tries to protect him, Donald fails to see the most obvious danger. And that the trouble might be closer than he thinks... Following Robert Williams's prize-winning debut Luke and Jon, How the Trouble Started is a dark, gripping novel about childhood, morality and the loneliness of children and adults. Told with Robert Williams's characteristic warmth, humanity and deceptively light touch, it is a story about how our best and worst intentions can lead us astray, and the moments we can never leave behind.
Visa hela texten

Robert Williams grew up in Clitheroe, Lancashire and currently lives in Manchester. His first novel, Luke and Jon, won a Betty Trask Award, was translated into seven languages and called 'a hugely impressive debut' in the Daily Telegraph. He has worked in a secondary school library, as a bookseller for Waterstones, and has written and released music under the name The Library Trust.