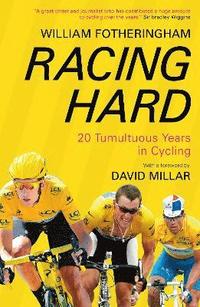 av William Fotheringham
Häftad Engelska, 2013-06-06
159
Köp
Spara som favorit
Specialorder (osäker tillgång). Skickas inom 11-20 vardagar.
Fri frakt inom Sverige över 159 kr för privatpersoner.
Few British schoolchildren of the seventies can have been as obsessed with the Tour de France as William Fotheringham, who smuggled copies of Miroir du Cyclisme into lessons to read inside his books. He saw the Tour for the first time in 1984, avidly following that year's race on television in the Normandy village where he lived. Since joining the Guardian in 1989, William Fotheringham has been at the forefront of British cycling journalism. Here he reflects on the events of the last twenty-three years - the triumphs, the tragedies and the scandals that have engulfed the world's most demanding sport. Key articles from his career are annotated with notes and reflections. What would he have said if he'd known then what we all know now about Lance Armstrong? Which cyclists and teams were not all they seemed? And which victories still rank as the greatest of all time? This is the definitive collection of cycling reporting.
Visa hela texten

William Fotheringham began writing about bike racing in 1988 and was covering the Tour de France within two years, one of maybe half a dozen British journalists on the race. He spent much of the 1990s writing for Cycling Weekly and Cycle Sport, combining that with work for the Guardian, who talked him into covering the Tour for them in 1994. On the sports desk in the Guardian he covered rugby as well as cycling, reported on the World Cup in 2003. His first full-length book, Put Me Back on My Bike, was published in 2002.