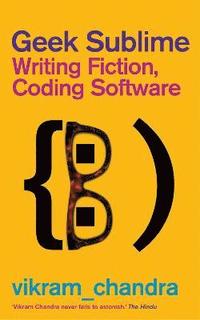 av Vikram Chandra
Häftad Engelska, 2014-02-06
177
Köp
Spara som favorit
Kan levereras innan julafton!
Finns även som
Visa alla 1 format & utgåvor
A great novelist on his twin obsessions: writing and coding. What is the relationship between the two? Is there such a thing as the sublime in code? Can we ascribe beauty to the craft of coding? Vikram Chandra is the award-winning author of two acclaimed novels and a collection of short stories - and has been a computer programmer for almost as long as he has been a writer. In his extraordinary new book he looks at the connection between these two worlds of art and technology. Coders are obsessed with elegance and style, just as writers are, but do the words mean the same thing to both? And is it a coincidence that Chandra is drawn to two seemingly opposing ways of thinking? Exploring these questions, Chandra creates an idiosyncratic history of coding - exploring such varied topics as logic gates and literary modernism, the male machismo of geeks, the striking presence of an 'Indian Mafia' in Silicon Valley, and the writings of Abhinavagupta, the 10th - 11th century Kashmiri thinker. Part technology story and part memoir, Geek Sublime is a book of sweeping ideas. It is a heady and utterly original work.
Visa hela texten

Born in New Delhi, India, in 1961, Vikram Chandra now divides his time between Bombay and Washington D.C. His debut novel, Red Earth and Pouring Rain, was awarded the David Higham Prize for Fiction and the Commonwealth Writers Prize for the Best First Published Book. His collection of stories, Love and Longing in Bombay, was published in 1997 and won the Commonwealth Writers Prize for the Eurasia region. It was also shortlisted for the Guardian Fiction Prize. His most recent novel, Sacred Games, was published in 2007 and was shortlisted for the Encore Awards.