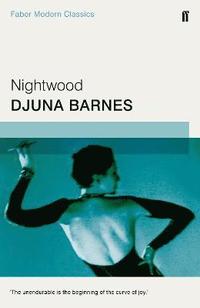 av Djuna Barnes
(1 röst)
Häftad Engelska, 2015-04-02
139
Köp
Spara som favorit
Skickas inom 3-6 vardagar.
Gratis frakt inom Sverige över 159 kr för privatpersoner.
Nightwood tells the stories of the love-lives of a group of Americans and Europeans in Paris in the 1920s - an exotic, night-time underworld, eccentric, seedy and beautiful. One of the earliest novels to explicitly portray homosexuality, the influence of Djuna Barnes's novel has been, and continues to be, exceptional. Nightwood is not only a classic of modernist literature, but was also acknowledged by T. S. Eliot as one of the great novels of the twentieth century.
Visa hela texten

Djuna Barnes was born in 1892 in Cornwall-on-Hudson in New York State. In 1912 she enrolled as a student at Pratt Institute and then at the Art Students' League, and while she was there she started to work as a reporter and illustrator for the Brooklyn Eagle. In 1921 she moved to Paris, where she lived for almost twenty years and wrote for such publications as Vanity Fair and the New Yorker. Nightwood, written in 1936, was her second novel. It is now considered a masterpiece, praised by T. S. Eliot for its 'great achievement of a style, the beauty of phrasing, the brilliance of wit and characterization, and a quality of horror and doom very nearly related to that of Elizabethan tragedy'. Her other works include A Book, a collection of short stories, poems and one-act plays; a satirical novel, Ladies Almanack; and a verse play, The Antiphon. She died in New York in 1982.