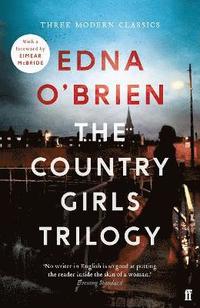 The Country Girls; The Lonely Girl; Girls in their Married Bliss

av Edna O'Brien
(1 röst)
Häftad Engelska, 2017-09-07
119
Köp
Spara som favorit
Skickas inom 5-8 vardagar.
Gratis frakt inom Sverige över 159 kr för privatpersoner.
Finns även som
Visa alla 2 format & utgåvor
ONE OF THE BBC'S '100 NOVELS THAT SHAPED OUR WORLD' Edna O'Brien's iconic trilogy of novels - The Country Girls, The Lonely Girl and Girls in their Married Bliss - depicts the lives and loves of two girls in rural 1950s Ireland. Edna O'Brien's debut novels revolutionised Irish literature in the 1960s. Banned by the authorities as 'indecent and obscene' and burned by the clergy, they were instantly notorious for their frank portrayal of sexual desire: but scandal soon became fame, and made this coming-of-age story a bestseller and instant classic. Caithleen 'Kate' Brady and Bridget 'Baba' Brennan have grown up in the repressive atmosphere of a small Irish village after World War II. Kate is a romantic, looking for love; Baba is a reckless survivor. After being expelled from convent school, they dream of conquering the bright lights of Dublin - but are rewarded with bad faith, bad luck, and bad sex; marry for the wrong reasons, then betray for the wrong reasons; and fight - in their unique ways - the expectations forced upon young 'girls' of every era that dictate the women they become. Published in an omnibus edition with a new foreword by Eimear McBride, Edna O'Brien's portrait of innocence and youth, love and despair, hope and reality, continues to inspire new generations of readers with its bravery, lyricism, humour, and courage.
Visa hela texten

Edna O'Brien has written more than twenty works of fiction. She is the recipient of many awards, including the Irish PEN Lifetime Achievement Award, the American National Arts Gold Medal, the Frank O'Connor Prize and the PEN/Nabokov Award For Achievement in International Literature. Born and raised in the west of Ireland, she has lived in London for many years. Her new novel, Girl, was published by Faber in September 2019. Eimear McBride is the author of two novels: The Lesser Bohemians (James Tait Black Memorial Prize) and A Girl is a Half-formed Thing (Bailey's Women's Prize for Fiction, Irish Novel of the Year, the Goldsmiths Prize, and others). She was the inaugural creative fellow at the Beckett Research Centre, University of Reading and occasionally writes for the Guardian, TLS, New Statesman and the Irish Times.