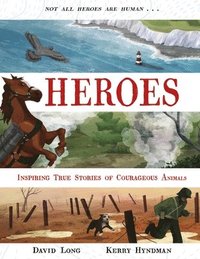 av David Long
Inbunden Engelska, 2018-10-04
213
Köp
Spara som favorit
Finns även som
Visa alla 2 format & utgåvor
Thirty-three incredible stories of animal heroics from the team that brought you Blue Peter Award-winning SURVIVORS For as long as there have been wars, animals have been out there saving lives. Courageous dogs, cats, birds, horses, and even a bear have shown courage and devotion, and this book tells you their extraordinary stories. Includes the story of Jet the Alsatian who became a hero of the Blitz, pulling survivors from burning rubble, night after night. Gallipoli Murphy, the donkey who served as an ambulance. Simon, the cat who saved his crew. And many, many more. These animals help us to remember that not all heroes are human. Glorious full-colour double-page illustrations throughout. Praise for the series: 'True-story fans will love this.' Inis Children's Books Ireland 'Full of incredible real-life stories . . . Ultimately an inspirational book, beautifully illustrated.' Angels and Urchins 'A great collection of harrowing, true survivor stories.' Kirkus
Visa hela texten

"This companion to Survivors tells the stories of 33 animals who served alongside humans in wartime. Long introduces dogs such as Tipperary Beauty, a terrier who rescued pets during the London Blitz, and Ricky, a Welsh collie sheepdog who cleared minefields. Noncanine subjects include Sergeant Reckless, a Mongolian racehorse who helped U.S. Marines during the Korean War; Simon, a ship cat who prevented rats from eating sailors' food during the Chinese Civil War; and Voytek, a bear taken in by the Polish Army corps who transported artillery shells and became fond of beer and cigarettes. Hyndman's matte, earth-toned illustrations imagine the animals leaping across smoky battlefields, navigating cities of rubble, and, in the case of carrier pigeons, careening across the sky with lifesaving messages. Readers will be heartened to learn of the accolades many of the animals received following their service, and that several enjoyed retirements as pets."--Publisher's Weekly "Each of the 23 accounts seems more jaw-dropping than the one before, and all are testaments to the human spirit. The handsome, oversize volume is enhanced by Hyndman's single- and double-page illustrations. While appealing to all readers, this will have special interest for reluctant ones." --Booklist "Throughout history, men, women, and children have battled the elements and lived to share their stories. Among the nearly two dozen subjects Long includes in this collection are 17-year-old Juliane Koepcke, who survived a plane crash in the Peruvian rainforest; Antarctic explorer Ernest Shackleton; and Aron Ralston, a hiker forced to amputate his own arm, an incident that inspired the 2010 film 127 Hours. Hyndman's grainy artwork depicts the survivors at the peak moments of danger--19th-century trapper Hugh Glass lunges at an attacking grizzly bear with his knife, surgeon Leonid Rogozov peers down at his abdomen, giving himself a necessary appendectomy at a polar research station. While offering excitement and peril, Long's riveting narratives also provide insight into how these individuals used their skills, knowledge, and fortitude to survive." --Publishers Weekly "Long compiles 23 harrowing true stories of men and women who survived everything from a plane crash to quicksand. The short vignettes span the 19th and 21st centuries, and some narratives are better known than others. Some tales convey hope, such as Anna Bagenholm's account of surviving hypothermia after falling into freezing water--an experience that led to discoveries about the human body and extreme cold. Themes of perseverance, inspiration, and interconnectedness ground the selections in reality and remind readers that those who survived often did so because others came to their aid. Some stories contain graphic scenes and death. Color illustrations accompany each selection and deftly capture the action. Hyndman portrays the individuals with few distinguishing features, allowing readers to imagine themselves in the survivors' tales. The absence of a table of contents and back matter makes this title better suited for pleasure reading than reports. VERDICT Thrilling accounts of peril that are sure to draw in casual readers." --School Library Journal "A large-format hardcover gathers together true stories of adventure and survival.Two that are well-known, at least to adults, are Ernest Shackleton's ill-fated Antarctic expedition and the ordeal of Aron Ralston, who cut off his own arm with a dull pocketknife in order to extricate himself from a dislodged boulder that trapped him in a narrow canyon, the subject of the film 127 Hours. Lesser known is the story of Poon Lim, who survived 133 days alone in the South Atlantic when the merchant ship he was serving on was sunk by a U-boat. At one point, he caught a shark several feet long, pulled it aboard his raft, beat it to death, and proceeded to suck its blood and eat it raw for nourishment. Seventeen-year-old

Writer and historian David Long is the author of the acclaimed Animals' VC: For Gallantry and Devotion and more than twenty other non-fiction books on a wide range of historical subjects. Jet the Rescue Dog, the first of several titles for younger readers, was published by Faber in 2014. He lives in Suffolk and has two teenage sons. Kerry Hyndman is a London based illustrator and map maker with a wide range of editorial, advertising and publishing clients. In her spare time she likes to snowboard, climb, hit things with rackets and cycle around.