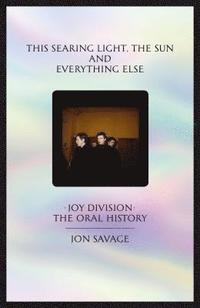 This Searing Light, the Sun and Everything Else

av Jon Savage
(1 röst)
Inbunden Engelska, 2019-04-04
229
Köp
Spara som favorit
Skickas inom 3-6 vardagar.
Fri frakt inom Sverige för privatpersoner.
Finns även som
Visa alla 2 format & utgåvor
The SUNDAY TIMES Top Ten Bestseller #1 Book of the Year, UNCUT #1 Book of the Year, ROUGH TRADE Book of the Year, MOJO Over the course of two albums and some legendary gigs, Joy Division became the most successful and exciting underground band of their generation. Then, on the brink of a tour to America, Ian Curtis took his own life. In This Searing Light, the Sun and Everything Else, Jon Savage has assembled three decades' worth of interviews with the principal players in the Joy Division story to create an intimate, candid and definitive account of the band. It is the story of how a group of young men can galvanise a generation of fans, artists and musicians with four chords and three-and-a-half minutes of music. And it is the story of how illness and inner demons can rob the world of a shamanic lead singer and visionary lyricist.
Visa hela texten

"Excellent ... it's the ultimate oral history of one of rock's most haunting legends"--Rolling Stone "Fans of the band will delight in the intimacy of the many stories and anecdotes, some of which are being shared publicly for the first time.... This Searing Light, The Sun And Everything Else represents the consolidated authoritative history of this important band, and as such it may in fact prove to be the last word on the topic. For fans of Joy Division, and of punk, post-punk, and British music generally, this is a must read."--Brooklyn Rail "These are some of the nearly 40 people from Joy Division's inner circle whose accounts Savage, who was also there at the time, has deftly woven into an almost detective-style MRI of the band and the forces and factors that formed it. Almost particle by particle, from descriptions of Manchester's industrial beginnings to the area's cultural void, Savage makes you understand that the members of Joy Division were driven to create something of immense beauty, as if there were no other choice." -- Los Angeles Times "As much as the story of this band has been pillaged, This Searing Light proves that there were still more Joy Division stories to be told." -- Popmatters "English music writer Savage turns his eye to one of the most iconic bands of the post-punk era. More than a dozen observers, including Joy Division members Peter Hook and Bernard Summer, tell the story of Ian Curtis' short-lived but endlessly influential band."--LA Times (Buzz-worthy Books to Look Forward To)

Bloggat om This Searing Light, the Sun and Everythin...