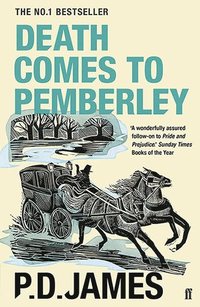 av P D James
(1 röst)
Häftad Engelska, 2018-10-04
126
Bevaka
Spara som favorit
Tillfälligt slut – klicka "Bevaka" för att få ett mejl så fort boken går att köpa igen.
Finns även som
Visa alla 3 format & utgåvor
Two great literary minds-master of suspense P.D. James and literary icon Jane Austen-come together in Death Comes to Pemberley, a bestselling historical crime fiction tribute to Pride and Prejudice. Conjuring the world of Elizabeth Bennett and Mr. Fitzwilliam Darcy and combining the trappings of Regency British society with a classic murder mystery, James creates a delightful mash-up that will intrigue any Janeite. The year is 1803, and Darcy and Elizabeth have been married for six years. There are now two handsome and healthy sons in the nursery, Elizabeth's beloved sister Jane and her husband Bingley live nearby and the orderly world of Pemberley seems unassailable. But all this is threatened when, on the eve of the annual autumn ball, the guests are preparing to retire for the night when a chaise appears, rocking down the path from Pemberley's wild woodland. As it pulls up, Lydia Wickham - Elizabeth's younger, unreliable sister - stumbles out screaming that her husband, George Wickham, has been murdered. Inspired by a lifelong passion for the work of Jane Austen, P.D. James masterfully recreates the world of Pride and Prejudice. Combining Austen's wit and the social commentary of Downton Abbey with her own signature excitement and suspense, James has crafted a brilliant crime story. Death Comes to Pemberley is a distinguished work of fiction, from one of the best-loved, most- read writers of our time, and was adapted as a miniseries by the BBC in 2013, starring Matthew Rhys, Anna Maxwell Martin, and Matthew Goode.
Visa hela texten

P. D. James was a bestselling and internationally acclaimed crime writer. She was the creator of Adam Dalgliesh and Cordelia Gray, and their long and successful series of mysteries. Her works include Cover Her Face (1962), An Unsuitable Job for a Woman (1972), Innocent Blood (1980), Children of Men (1992), and the Jane Austen-inspired Death Comes to Pemberley (2011). James was born in Oxford in 1920. She won awards for crime writing in Britain, America, Italy and Scandinavia, including the Mystery Writers of America Grandmaster Award. She received honorary degrees from seven British universities, was awarded an OBE in 1983 and created a life peer in 1991. In 1997 she was elected President of the Society of Authors, and stood down from this role in 2013.