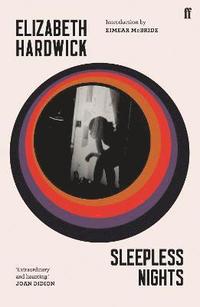 av Elizabeth Hardwick
Häftad Engelska, 2019-07-04
109
Köp
Spara som favorit
Skickas inom 5-8 vardagar.
Fri frakt inom Sverige över 159 kr för privatpersoner.
Finns även som
Visa alla 3 format & utgåvor
Sally Rooney: 'A series of fleeting images and memories ... united by the high intelligence and beauty of Hardwick's prose.' Rediscover a lost American classic: Sleepless Nights, a kaleidoscopic scrapbook of one woman's memories, here reissued with a new introduction by Eimear McBride. I am alone here in New York, no longer a we ... First published in 1979, Sleepless Nights is a unique collage of fiction and memoir, letters and essays, portraits and dreams. It is more than the story of a life: it is Elizabeth Hardwick's experience of womanhood in the twentieth century. Escaping her childhood home of Kentucky, the narrator arrives at a bohemian hotel in Manhattan filled with 'drunks, actors, gamblers ... love and alcohol and clothes on the floor.' Here begin the erotic affairs and dinner parties, the abortions and heartbreaks, the friendships and 'people I have buried'. Here are luminous sketches of characters she has met that illuminate the era's racism, sexism, and poverty. Above all, here is prose blurring into poetry, language to lose - and perhaps to find - yourself in. Society tries to write these lives before they are lived. It does not always succeed.
Visa hela texten

Elizabeth Hardwick (1916-2007) was born in Lexington, Kentucky, and educated at the University of Kentucky and Columbia University. She was one of the great critics and intellectuals of her time. As co-founder of The New York Review of Books, she contributed more than a hundred pieces to the magazine, as well as writing fiction for the Partisan Review and New Yorker. She authored three novels, a biography of Herman Melville, and four collections of essays, and was the recipient of a Gold Medal from the American Academy of Arts and Letters and the Lifetime Achievement Citation from the National Book Critics Circle. Hardwick was married to the poet Robert Lowell from 1949 to 1972 and their collected correspondence, The Dolphin Letters, will be published in 2019. Eimear McBride is the author of two novels: The Lesser Bohemians (James Tait Black Memorial Prize) and A Girl is a Half-formed Thing (Bailey's Women's Prize for Fiction, Irish Novel of the Year, the Goldsmiths Prize, and others). She was the inaugural creative fellow at the Beckett Research Centre, University of Reading and occasionally writes for the Guardian, TLS, New Statesman and the Irish Times.