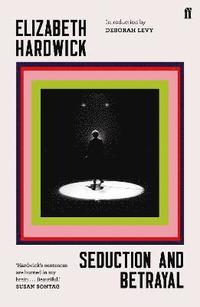 av Elizabeth Hardwick
Häftad Engelska, 2019-07-04
119
Köp
Spara som favorit
Skickas inom 7-10 vardagar.
Fri frakt inom Sverige över 159 kr för privatpersoner.
Finns även som
Visa alla 3 format & utgåvor
ONE OF THE WHITE REVIEW'S BEST BOOKS OF 2019 Elizabeth Hardwick's iconic essay collection Seduction and Betrayal is a radical portrait of women and literature, reissued with a new introduction by Deborah Levy. 'Hardwick's sentences are burned in my brain.' - Susan Sontag Sidelined. Betrayed. Killed off. Elizabeth Hardwick dissects the history of women and literature. In her most virtuoso work of criticism, she explores the lives of the Brontes, Woolf, Eliot and Plath; the fate of literary wives such as Zelda Fitzgerald and Jane Carlyle; and the destinies of fictional heroines from Richardson's Clarissa to Ibsen's Nora. With fierce empathy and biting wit, Hardwick mines their childhoods, families, and personalities to probe the costs of sex, love, and marriage. Shattering the barrier between writing and life, she asks who is the seducer and who the seduced; who the victim and who the victor. First published in 1974, yet both urgently timely and timeless, Seduction and Betrayal explodes the conventions of the essay: and the result is nothing less than a reckoning.
Visa hela texten

Elizabeth Hardwick (1916-2007) was born in Lexington, Kentucky, and educated at the University of Kentucky and Columbia University. She was one of the great critics and intellectuals of her time. As co-founder of The New York Review of Books, she contributed more than a hundred pieces to the magazine, as well as writing fiction for the Partisan Review and New Yorker. She authored three novels, a biography of Herman Melville, and four collections of essays, and was the recipient of a Gold Medal from the American Academy of Arts and Letters and the Lifetime Achievement Citation from the National Book Critics Circle. Hardwick was married to the poet Robert Lowell from 1949 to 1972 and their collected correspondence, The Dolphin Letters, will be published in 2019. Deborah Levy is a British playwright, novelist and poet, who has also written for the RSC and the BBC. She is the author of a celebrated story collection, Black Vodka, and six novels including Swimming Home, which was shortlisted for the Man Booker Prize 2012, and Hot Milk, shortlisted for the Goldsmiths Prize and Man Booker Prize 2016. She is writing a three-part series of 'living autobiographies' which far includes The Cost of Living and Things I Don't Want To Know. Her new novel, The Man Who Saw Everything, will be published in August 2019.