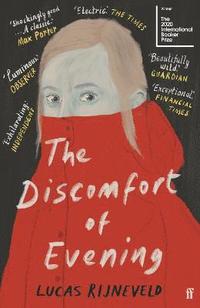 The Discomfort of Evening

WINNER OF THE BOOKER INTERNATIONAL PRIZE 2020

av Marieke Lucas Rijneveld
Häftad Engelska, 2020-09-24
106
Köp
Spara som favorit
Skickas inom 7-10 vardagar.
Fri frakt inom Sverige över 159 kr för privatpersoner.
Kan levereras innan jul!
Finns även som
Visa alla 2 format & utgåvor
*WINNER OF THE BOOKER INTERNATIONAL PRIZE 2020* *ONE OF THE GUARDIAN'S BEST BOOKS OF 2020* 'One of the best debut novels I have ever read. Shockingly good ... A classic.' Max Porter The sensational Dutch bestseller: 'Exceptional' (Financial Times) 'Exhilarating' (Independent) 'Luminous' (Observer) 'Beautifully wild' (Guardian) 'An earthy and irreverent new voice, thrillingly uninhibited' (New York Times) I asked God if he please couldn't take my brother Matthies instead of my rabbit. 'Amen.' Ten-year-old Jas has a unique way of experiencing her universe: the feeling of udder ointment on her skin as protection against harsh winters; the texture of green warts, like capers, on migrating toads; the sound of 'blush words' that aren't in the Bible. But when a tragic accident ruptures the family, her curiosity warps into a vortex of increasingly disturbing fantasies - unlocking a darkness that threatens to derail them all. A bestselling sensation in the Netherlands, Marieke Lucas Rijneveld's radical debut novel is studded with images of wild, violent beauty: a world of language unlike any other, exquisitely captured in Michele Hutchison's translation. 'THE MOST TALKED ABOUT DEBUT NOVEL OF 2020 ALREADY' [Dazed & Confused] ONE OF VOGUE'S TOP FIVE DEBUTS OF 2020 ONE OF THE OBSERVER'S HIGHLIGHTS OF 2020 ONE OF THE GUARDIAN'S TOP TEN BEST NEW BOOKS IN TRANSLATION
Visa hela texten

Marieke Lucas Rijneveld (b. 1991) grew up in a Reformed farming family in North Brabant before moving to Utrecht. One of the greatest new voices in Dutch literature, their first poetry collection, Calf's Caul, was awarded the C. Buddingh' Prize for best poetry debut in 2015, with the newspaper de Volkskrant naming them literary talent of the year. In 2018, Atlas Contact published their first novel, The Discomfort of Evening,which won the prestigious ANV Debut Prize and was a national bestseller. The UK edition won the Booker International Prize 2020. Alongside their writing career, Rijneveld works on a dairy farm. Michele Hutchison was born in the UK and has lived in Amsterdam since 2004. After a period working as an editor, she became a literary translator from Dutch, and recently translated Marieke Lucas Rijneveld's The Discomfort of Evening which won the Booker International Prize 2020.