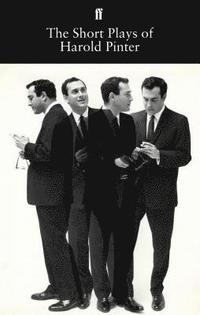 The Short Plays of Harold Pinter

av Harold Pinter
Häftad Engelska, 2018-09-06
209
Köp
Spara som favorit
Skickas inom 5-8 vardagar.
Gratis frakt inom Sverige över 159 kr för privatpersoner.
Finns även som
Visa alla 1 format & utgåvor
The Room, The Dumb Waiter, A Slight Ache, A Night Out, Night School, The Collection, The Dwarfs, The Lover, Tea Party, The Basement, Landscape, Silence, Monologue, Family Voices, A Kind of Alaska, Victoria Station, One for the Road, Mountain Language, The New World Order, Party Time, Moonlight, Ashes to Ashes, Celebration This volume contains the complete short plays of Harold Pinter from The Room, first performed in 1960, to Celebration, which premiered in 2000. The book commemorates the tenth anniversary of the playwright's death and coincides with Pinter at the Pinter, a celebratory season staging twenty of his one-act plays at the Harold Pinter Theatre, London, 2018. With a foreword by Antonia Fraser. 'The foremost representative of British drama in the second half of the twentieth century.' Swedish Academy citation on awarding Harold Pinter the Nobel Prize in Literature, 2005.
Visa hela texten

HAROLD PINTER was born in 1930. He married Antonia Fraser in 1980. In 1995 he won the David Cohen British Literature Prize, awarded for a lifetime's achievement in literature. In 1996 he was given the Laurence Olivier Award for a lifetime's achievement in theatre. In 2002 he was made a Companion of Honour for services to literature. In 2005 he was awarded the Nobel Prize for Literature and, in the same year, the Wilfred Owen Award for Poetry and the Franz Kafka Award (Prague). In 2006 he was awarded the Europe Theatre Prize and, in 2007, the highest French honour, the Legion d'honneur. He died in 2008