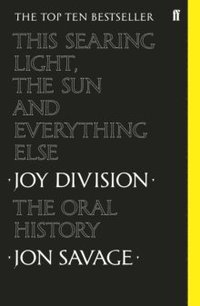 This Searing Light, the Sun and Everything Else

av Jon Savage
Häftad Engelska, 2020-04-02
150
Köp
Spara som favorit
Finns även som
Visa alla 1 format & utgåvor
The SUNDAY TIMES Top Ten Bestseller #1 Book of the Year, UNCUT #1 Book of the Year, ROUGH TRADE Book of the Year, MOJO Over the course of two albums and some legendary gigs, Joy Division became the most successful and exciting underground band of their generation. Then, on the brink of a tour to America, Ian Curtis took his own life. In This Searing Light, the Sun and Everything Else, Jon Savage has assembled three decades' worth of interviews with the principal players in the Joy Division story to create an intimate, candid and definitive account of the band. It is the story of how a group of young men can galvanise a generation of fans, artists and musicians with four chords and three-and-a-half minutes of music. And it is the story of how illness and inner demons can rob the world of a shamanic lead singer and visionary lyricist.
Visa hela texten

Savage is one of the best, and most renowned music journalists this country has ever produced [This Searing Light, The Sun and Everything Else is] not just about a band, but a portrait of a city, and of four young men discovering their own talent, and finding acclamation and success; and one of them unable to cope with it. It's extraordinary. - Nicholas Lezard "Fans of the band will delight in the intimacy of the many stories and anecdotes, some of which are being shared publicly for the first time.... This Searing Light, The Sun And Everything Else represents the consolidated authoritative history of this important band, and as such it may in fact prove to be the last word on the topic. For fans of Joy Division, and of punk, post-punk, and British music generally, this is a must read."--Brooklyn Rail "Excellent ... it's the ultimate oral history of one of rock's most haunting legends" -- Rob Sheffield Rolling Stone