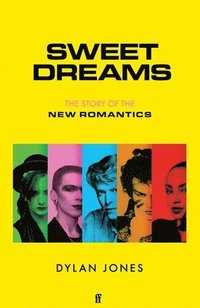 From Club Culture to Style Culture, the Story of the New Romantics

av Dylan Jones
Inbunden Engelska, 2020-10-01
223
Köp
Spara som favorit
Skickas inom 7-10 vardagar.
Gratis frakt inom Sverige över 159 kr för privatpersoner.
Finns även som
Visa alla 2 format & utgåvor
David Bowie. Culture Club. Wham!. Soft Cell. Duran Duran. Sade. Adam Ant. Spandau Ballet. The Eurythmics. 'Excellent' Guardian 'Hugely enjoyable' Irish Times 'Dazzling' LRB 'Fascinating' New Statesman 'An absolute must-read' GQ One of the most creative entrepreneurial periods since the Sixties, the era of the New Romantics grew out of the remnants of post-punk and developed quickly alongside club culture, ska, electronica, and goth. The scene had a huge influence on the growth of print and broadcast media, and was arguably one of the most bohemian environments of the late twentieth century. Not only did it visually define the decade, it was the catalyst for the Second British Invasion, when the US charts would be colonised by British pop music - making it one of the most powerful cultural exports since the Beatles. In Sweet Dreams, Dylan Jones charts the rise of the New Romantics through testimony from the people who lived it. For a while, Sweet Dreams were made of this.
Visa hela texten

Praise for David Bowie: A Life by Dylan Jones: "Jones' Bowie opus serves as the ultimate oral history of the artist's life and musical journey." --Billboard "Beguiling... the fabulosity of Bowie's life and times lends itself extraordinarily well to the oral history form." --San Francisco Chronicle "Drawn from over 180 interviews with friends, rivals, lovers and collaborators, some of whom have never before spoken about their relationship with Bowie, this oral history weaves a hypnotic spell as it unfolds the story of a remarkable rise to stardom and an unparalleled artistic path." --Parade "Superb ... Suits the shape-shifting, beguiling, enigmatic complexities of its subject perfectly. It's hard to imagine anything that will do Bowie better justice."--William Boyd, Guardian "Revelatory and surprising -- perfect for the Ziggy completist." --New York Magazine Praise for Wichita Lineman by Dylan Jones "The author's account satisfies, without a wasted word or the usual cliches of pop-culture writing and with plenty of quotations from the principals involved in making the song an enduring hit. An affectionate homage to an indisputably great song, one that readers will listen to with new ears."--Kirkus Reviews "Dylan Jones's Sweet Dreams is a vast and fascinating collection of interviews that showcase a decade of British music and culture--the New Romantic period, from 1975-1985. Mid-seventies England was full of chaos and creativity as art school students found belonging in Bowie-themed nightclubs. Through interviews with designers, performers, and influencers, the evolution of this English outsiders' scene is documented from an insider perspective, while a recommended discography provides a soundtrack for the decade. Though England's punk scene burned out, its DIY philosophies and disruptive appearance imprinted itself upon the creatives of an era. Club goers describe hand-making their outfits for places like the Blitz, defined by its beautiful and experimental crowd. The style magazine was born, kickstarting celebrity culture, and the first paparazzi competed for photographs and gossip. Creators of magazines like i-D explain their visions, while hairdressers and designers invented a new profession to fit the times--that of the stylist. For the New Romantics, style was also a reclamation of self: musicians like Annie Lennox and Boy George discuss how their androgyny and sexuality subverted gender roles and was liberating for gay fans. Interviews impart the pain of the AIDs epidemic, which killed many people and impeded society's burgeoning acceptance of the LGBTQ+ community. History and technology merge as musicians recall synthesizers becoming affordable, describing them as the sound of the future. The relationship between music and visual media was strengthened by television; bands like Duran Duran talk about how music videos linked their music with a lifestyle. The Live Aid concert, popularized by global coverage, began the rise of stadium tours, taking London's street culture around the world. Sweet Dreams contextualizes the fashion, politics, sex, and technology involved in the music of The New Romantics, allowing the story of the movement to be told by those who created it." -- Foreword Reviews "The marvellously suave Mr. Jones rehabilitates the scenesters' scene a time and place once dismissed by rain-coated puritans like me, only to be brought gloriously to life years later - like a peacock's fanning tail - in this definitive oral history. It's all here: the swishing, the androgynous preening, the sweetly-dreamt synth-pop splendour of early '80s Britain. Something was happening, and Mr. Jones knew what it was." -- Barney Hoskyns "Jones' style - part testimony, part documentary - sheds light on one of the most unanticipated and misunderstood shifts in popular music and street fashion, that sudden lurch towards th