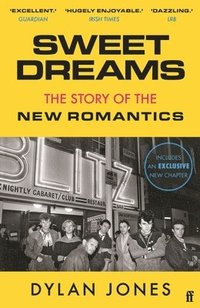 From Club Culture to Style Culture, the Story of the New Romantics

av Dylan Jones
Häftad Engelska, 2021-09-16
169
Bevaka
Spara som favorit
Ännu ej utkommen – klicka "Bevaka" för att få ett mejl så fort boken boken går att köpa.
Finns även som
Visa alla 2 format & utgåvor
*Includes an exclusive new chapter* 'Excellent' Guardian 'Hugely enjoyable' Irish Times 'Dazzling' LRB 'Fascinating' New Statesman 'An absolute must-read' GQ An NME and BBC Culture Book of the Year 2020 For a while, Sweet Dreams were made of this. From the testimony of the people who lived it, comes Dylan Jones' masterful history of the Blitz kids, synth-pop and the style press, from 1975 to 1985. 'Few music scenes have received more opprobrium than the New Romantics. A bunch of fame-grabbing clothes-horses? Certainly. But also, a progressive force that opened new routes for music while embracing most genders, ethnicities and sexual preferences.' MOJO 'Compelling reading for those who lived and breathed the indulgence of the era without realising its significance or contemplating its legacy.' Simon Armitage 'Dylan Jones explains how a bunch of penniless nightclub show-offs morphed into pop royalty in the 1980s . . . An excitable patchwork of interviews, punctuated with gossip and pertinent theory.' UNCUT 'It's all here: the swishing, the androgynous preening, the sweetly-dreamt synth-pop splendour of early '80s Britain. Something was happening, and Mr. Jones knew what it was.' Barney Hoskyns
Visa hela texten

Dylan Jones studied at Chelsea School of Art and St. Martin's School of Art. A former editor at i-D, The Face, Arena, the Observer and the Sunday Times, he is currently the Editor-In-Chief of GQ. He has won the British Society of Magazine Editors "Editor of the Year" award a record eleven times, and in 2013 was the recipient of the Mark Boxer Award. Under his editorship the magazine has won over 50 awards. He is the author of the Sunday Times best-seller David Bowie: A Life, and the New York Times best seller Jim Morrison: Dark Star. A trustee of the Hay Festival, in 2013 he was awarded an OBE for services to publishing.