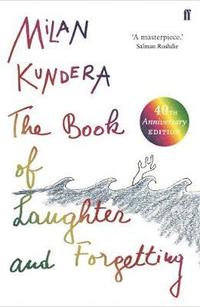 The Book of Laughter and Forgetting

av Milan Kundera
Häftad Engelska, 2019-10-03
129
Köp
Spara som favorit
Finns även som
Visa alla 3 format & utgåvor
A new edition of the seminal novel by a literary master, to celebrate the 40th anniversary of its first publication. 'One is torn between profound pleasure in the novel's execution and wonder at the pain that inspired it.' Ian McEwan 'A masterpiece.' Salman Rushdie This book is a novel in the form of variations. The various parts follow each other like the various stages of a voyage, leading into the interior of a theme, the interior of a thought, the interior of a single, unique situation the understanding of which recedes from my sight into the distance. It is a book about laughter and forgetting, about forgetting and about Prague, about Prague and about the angels.
Visa hela texten

The French-Czech novelist Milan Kundera was born in the Czech Republic and has lived in France since 1975. He is the author of the internationally acclaimed and bestselling novels The Joke, Life is Elsewhere, The Farewell Waltz, The Book of Laughter and Forgetting, The Unbearable Lightness of Being, Immortality, and the short-story collection Laughable Loves - all originally in Czech. His more recent novels, Slowness, Identity, Ignorance and The Festival of Insignificance, as well as his nonfiction works, The Art of the Novel, Testaments Betrayed, The Curtain, and Encounter, were originally written in French.