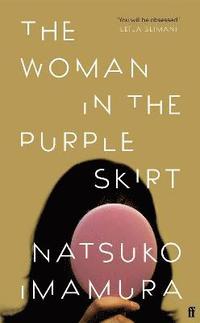 The Woman in the Purple Skirt

av Natsuko Imamura
Häftad Engelska, 2021-06-03
150
Köp
Spara som favorit
Finns även som
Visa alla 3 format & utgåvor
'Chilling.' Vogue 'As unusual as it is alluring.' Elle 'Delightfully disturbing.' Refinery 29 'Very powerful.' Sayaka Murata 'Disquieting.' Paula Hawkins 'You will be obsessed.' Leila Slimani The Woman in the Purple Skirt is being watched. Someone is following her, always perched just out of sight, monitoring which buses she takes; what she eats; whom she speaks to. But this invisible observer isn't a stalker - it's much more complicated than that.
Visa hela texten

Natsuko Imamura was born in Hiroshima, Japan, in 1980. Her fiction has won various prestigious Japanese literary prizes, including the Noma Literary New Face Prize, the Mishima Yukio Prize, and the Akutagawa Prize. She lives in Osaka with her husband and daughter. Lucy North is a British translator of Japanese fiction and non-fiction. Her translations include Toddler Hunting and Other Stories, as yet the sole book of fiction in English by Taeko Kono, and Record of a Night Too Brief, a collection of stories by Hiromi Kawakami. Her fiction translations have appeared in Granta, Words Without Borders, and The Southern Review and in several anthologies, including The Oxford Book of Japanese Short Stories and The Columbia Anthology of Modern Japanese Literature. She lives in Hastings, East Sussex.