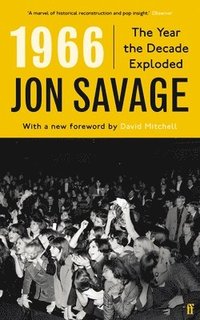 The Year the Decade Exploded

av Jon Savage
Häftad Engelska, 2021-06-03
150
Köp
Spara som favorit
Finns även som
Visa alla 2 format & utgåvor
WINNER OF THE PENDERYN MUSIC PRIZE A GUARDIAN MUSIC BOOK OF THE YEAR, 2015 FEATURING A NEW FOREWORD BY DAVID MITCHELL Award-winning, Sunday Times bestselling author Jon Savage's monument to the year that shaped the future of global pop cultural history. 'One of Britain's most trusted cultural historians.' THE FACE In America, in London, in Amsterdam, in Paris, revolutionary ideas fomenting since the late 1950s reached boiling point, culminating in a year in which the transient pop moment burst forth. Exploring the canonical figures, from The Beatles and Boty to Warhol and Reagan, 1966 delves deep into the social and cultural heart of the decade through masterfully compiled archival primary sources. 'A marvel of hisotrical reconstruction and pop insight.' OBSERVER 'Absorbing . . . this is not only fine pop writing, but social history of a high order.' GUARDIAN 'Savage is rightly regarded as one of the finest cultural critics of the past 40 years . . . an enthralling, exhiliarting read.' IRISH TIMES 'Exceptional.' MOJO (This book is part of a reissue of Jon Savage's seminal works: 1966, Teenage, and England's Dreaming)
Visa hela texten