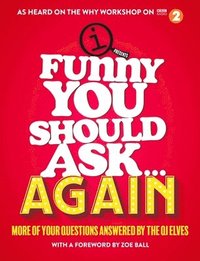 More of Your Questions Answered by the QI Elves

av Qi Elves
Inbunden Engelska, 2021-10-14
154
Köp
Spara som favorit
Finns även som
Visa alla 1 format & utgåvor
*QI's brand new book for 2021. The perfect Christmas gift for the incurably curious* 'Funny and fascinating . . . it's really rather brilliant.' ZOE BALL 'Made me chortle.' DERMOT O'LEARY 'Fantastic . . . I loved it.' STEVE WRIGHT 'The best trivia book of the season.' THE SPECTATOR 'Mind-blowing.' DAILY MAIL 'Genuinely interesting.' POPULAR SCIENCE Which lottery numbers should I pick? Is it true that we are made entirely of stardust? Can dogs tell the time? Why do songs get stuck in my head? If Rome wasn't built in a day, how long did it take? How do you wash a raspberry? What is the most expensive thing on Earth? Where is last Wednesday? These are just a few of the questions put to the QI Elves by the listeners of BBC Radio 2's The Zoe Ball Breakfast Show. In their brand new book, you'll learn their fascinating and frequently hilarious answers.From spiders to stinging nettles, bees to boy bands and twins to thermal undies, you'll wonder why these questions hadn't occurred to you before - but you'll never forget the answers and will want to share them with all your friends. Includes an introduction by Zoe Ball. PRAISE FOR THE QI ELVES' PREVIOUS BOOK FUNNY YOU SHOULD ASK . . . 'QI have outdone themselves!.' ALAN DAVIES 'A cracker of a book.' SUE PERKINS 'Genuinely useful and endlessly fascinating.' THE SPECTATOR 'Hilarious.' DAILY MAIL For more from the team behind QI's hit TV show check out the QI FACTS series of books, @qikipedia and listen to their weekly podcast at nosuchthingasafish.com or visit qi.com
Visa hela texten

The QI Elves are the team of writers and researchers behind BBC Two's smash-hit panel show QI. They have authored the 10,000 Facts series of QI books across seven titles, reached the semi-finals of the BBC quiz show Only Connect and had over 350 million listens on their podcast No Such Thing As A Fish. They have appeared on 'The Why Workshop' on The Zoe Ball Breakfast Show on BBC Radio 2 for over two years. For more from the team behind QI, visit qi.com or @qikipedia. Zoe Ball is the current and first female host of the BBC Radio 2 Breakfast Show. After presenting the much-lauded Live & Kicking on the BBC, she was also the first woman to front the BBC Radio 1 Breakfast Show. @ZoeTheBall