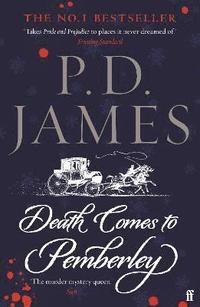 av P D James, P D James
Häftad Engelska, 2022-10-06
115
Köp
Spara som favorit
Finns även som
Visa alla 3 format & utgåvor
'A wonderful treat.' Melvyn Bragg 'A sparkling curio that will appeal to both Janeites and Jamesites.' Daily Telegraph The world is classic Jane Austen. The mystery is vintage P.D. James. In their six years of marriage, Elizabeth and Darcy have forged a peaceful, happy life for their family at Pemberley, Darcy's impressive estate. But on the eve of their annual autumn ball, chaos descends. A chaise appears, rocking down the path from Pemberley's wild woodland. As it pulls up, Lydia Wickham - Elizabeth Bennet's younger, unreliable sister - stumbles out screaming that her husband has been murdered. Plunged into frightening mystery and a lurid murder trial, the lives of Pemberley's owners and servants alike may never be the same . . .
Visa hela texten

P. D. James (1920-2014) was born in Oxford and educated at Cambridge High School for Girls. From 1949 to 1968 she worked in the National Health Service and subsequently in the Home Office, first in the Police Department and later in the Criminal Policy Department. All that experience was used in her novels. She was a Fellow of the Royal Society of Literature and of the Royal Society of Arts and served as a Governor of the BBC, a member of the Arts Council, where she was Chairman of the Literary Advisory Panel, on the Board of the British Council and as a magistrate in Middlesex and London. She was an Honorary Bencher of the Honourable Society of the Inner Temple. She won awards for crime writing in Britain, America, Italy and Scandinavia, including the Mystery Writers of America Grandmaster Award and The National Arts Club Medal of Honor for Literature (US). She received honorary degrees from seven British universities, was awarded an OBE in 1983 and was created a life peer in 1991. In 1997 she was elected President of the Society of Authors, stepping down from the post in August 2013. Tributes to P.D. James (1920- 2014) From Stephen Page's Tribute to P.D. James , given at the Memorial Service in London on 29th April, 2015 Phyllis had a long writing career of over fifty years that began surprisingly late. She embarked on Cover Her Face in her mid-thirties. In her autobiography, Time to Be in Earnest, she admitted some regret that she didn't start earlier, saying that 'a streak of indolence . . . made it more agreeable to contemplate the first book rather than actually write it'. Yes, the well-known indolence of P. D. James! .... Despite a later start she leaves an impressive body of work comprising nineteen brilliant and original novels, and three works of non-fiction, all of which continue to be read throughout the world. To her the choice of detective fiction was simply obvious, but she made it her own and stamped an originality and literary quality upon the genre like no other writer before her. She said that she wrote detective novels for the reasons readers are fascinated by them, for what she called 'the catharsis of carefully controlled terror' and the bringing of order out of disorder. .... The story of her arrival at Faber is well known. At a dinner at All Souls, Elaine Greene, Phyllis's newly acquired agent, sat next to Charles Monteith, a director from Faber. He said that Faber was looking for a new detective-fiction writer since the recent death of Cyril Hare, and Elaine replied, 'I think I have what you are looking for.' Faber took on Cover Her Face in 1960, prompting the marvellous image of Phyllis, in her own words, 'prancing up and down the hall' on hearing the news. A treasure in the Faber Archive is the first book report, written by a perceptive female editor who quickly saw Phyllis's talent, and also perhaps one of the less discussed keys to the success of the Dalgliesh books. She commented that maybe it required a male editor's opinion, and I quote, 'I . . . got rather carried away by the inspector's compelling blue eyes.' Inspector Dalgliesh was never far from Phyllis's thoughts, and not, I think, for his blue eyes. He is a good man, a poet, and he stands and speaks for Phyllis's humanity, a humanity that meant she could imagine what it was to be so overrun by desire or envy or anger or vengefulness that a person would commit a terrible crime. This gives the books their toughness and believability, and makes the reader's feeling for Dalgliesh all the greater as he seeks to restore order. Phyllis's compassion and love is visible both in and for Dalgliesh. Her kindness to her hero in the last three books, with his marriage to Emma - with more than a nod to her beloved Jane Austen - is so moving, and gives her readers the most encouraging and deeply affecting portrait of love's healing power. It's a gift to us all, as also are the final pages of Death Comes to Pemberley where Darcy and Elizabeth surv