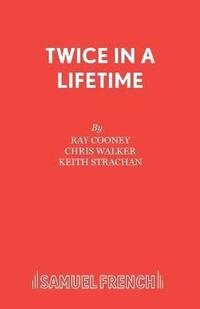 Twice in a Lifetime

av Ray Cooney, Chris Walker, Keith Strachan
Häftad Engelska, 2010-07-29
289
Köp
Spara som favorit
Skickas inom 10-15 vardagar.
Fri frakt inom Sverige för privatpersoner.
Property lawyer Steven Tancred is disillusioned with Monday morning meetings and evicting little old ladies from their homes. He senses that there must be more to life than lawsuits and his imminent marriage to Barbara, the boss' daughter. When Steven visits hypnotist Dr Patel to stop smoking, he unexpectedly regresses to a previous existence in 1920s Chicago as Johnny May, a reluctant gangster with the notorious Bugs Moran. Returning to the present, Steven is determined not to let his past get away from him, and proceeds to 'become' Johnny as often as he can. Soon Johnny has fallen for nightclub singer Ruby, who also happens to be Bugs' 'broad'. When Steven reads in an old newspaper that Johnny and Ruby were killed in the Valentine's Day Massacre of February 1929, he is determined to save them from their fate. True love might conquer all, but can it rewrite history? A riotous time-travelling adventure, "Twice In A Lifetime" offers a number of challenging doubling opportunities as it switches between modern day London and 1920s ragtime Chicago.
Visa hela texten

Bloggat om Twice in a Lifetime