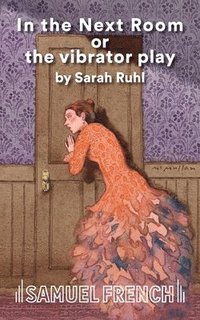 av Sarah Ruhl
Häftad Engelska, 2010-06-18
189
Köp
Spara som favorit
Skickas inom 5-8 vardagar.
Gratis frakt inom Sverige över 159 kr för privatpersoner.
Characters: 3m, 4f / Interior In the Next Room or the vibrator play is a comedy about marriage, intimacy, and electricity. Set in the 1880s at the dawn of the age of electricity and based on the bizarre historical fact that doctors used vibrators to treat 'hysterical' women (and some men), the play centers on a doctor and his wife and how his new therapy affects their entire household. In a seemingly perfect, well-to-do Victorian home, proper gentleman and scientist Dr. Givings has innocently invented an extraordinary new device for treating "hysteria" in women (and occasionally men): the vibrator. Adjacent to the doctor's laboratory, his young and energetic wife tries to tend to their newborn daughter-and wonders exactly what is going on in the next room. When a new "hysterical" patient and her husband bring a wet nurse and their own complicated relationship into the doctor's home, Dr. and Mrs. Givings must examine the nature of their own marriage, and what it truly means to love someone. This laugh out loud, provocative and touching play premiered at Berkely Rep and subsequently marked Sarah Ruhl's Broadway debut opening at the Lyceum Theatre on November 19th, 2009. Winner! 2010 Will Glickman Award for Best New Play to Premiere in the Bay Area! "Insightful, fresh and funny, the play is as rich in thought as it is in feeling...one of the most gifted and adventurous American playwrights to emerge in recent years...In the Next Room is a true novelty: a sex comedy designed not for sniggering teenage boys - or grown men who wish they were still sniggering teenage boys - but for adults with open hearts and minds." -New York Times "A play that's smart, delicate and very, very funny!" -New York Post "If Henrik Ibsen and Oscar Wilde had decided to collaborate on a post-modern drawing-room comedy, the hotsy-totsy twosome surely would have turned out something very much like Sarah Ruhl's genuinely hysterical new work" -Theatremania "Sarah Ruhl, whose previous work I execrated, has written a smart, charming, iridescently funny-serious jewel...As Ruhl traces it with wit and insight, and without the slightest prurience, the birth of this new era gives rise to colorful events, astute psychological revelations and endearingly apt dialogue." -Bloomberg "The playwright mines her subject for suitably bawdy humor without resorting to vulgarity. But what really gives the work its distinction is its sensitive exploration of the physical and emotional repression suffered by the women of the era, which has yet to disappear entirely...The play beautifully balances its humor and pathos." -Hollywood Reporter
Visa hela texten