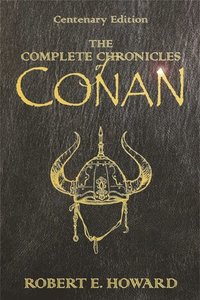 The Complete Chronicles Of Conan

av Robert E Howard
(2 röster)
Inbunden Engelska, 2006-01-01
270
Köp
Spara som favorit
Finns i lager! Skickas inom 1-2 vardagar.
Fri frakt inom Sverige för privatpersoner.
Finns även som
Visa alla 1 format & utgåvor
Conan the Cimmerian: the boy-thief who became a mercenary, who fought and loved his way across fabled lands to become King of Aquilonia. Neither supernatural fiends nore demonic sorcery could oppose the barbarian warrior as he wielded his mighty sword and dispatched his enemies to a bloody doom on the battlefields of the legendary Hyborian age. Collected together in one volume for the very first time, in chronological order, are Robert E. Howard's tales of the legendary hero, as fresh and atmospheric today as when they were first published in the pulp magazines of more than seventy years ago. Compiled by and with a foreward and afterword by award-winning writer and editor Stephen Jones.
Visa hela texten

The energy of the writing practically thrums off the page and often the sense of tension and unease invoked is genuinely unsettling. Read it, then use the weighty tome to smite your enemies, drive them before you and hear the lamentation of their women! -- Brian Williamson * STARBURST *

Robert Erwin Howard was born and raised in rural Texas, the son of a pioneer physician. He began writing professionally at the age of fifteen and until his tragic death at the age of thirty turned out dozens of tales of heroic and supernatural fantasy that won him a huge audience across the world and influenced a whole generation of writers, from Robert Jordan to Raymond E. Feist.