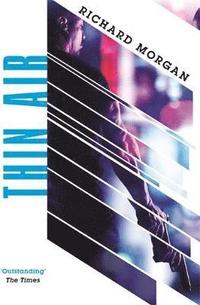 From the author of Netflix's Altered Carbon

av Richard Morgan
Häftad Engelska, 2019-06-13
109
Köp
Spara som favorit
Skickas inom 7-10 vardagar.
Gratis frakt inom Sverige över 159 kr för privatpersoner.
Finns även som
Visa alla 1 format & utgåvor
Richard Morgan has always been one of our most successful SF authors with his fast-moving and brutal storylines, blistering plots and a powerful social conscience behind his work. And now he's back, with his first SF novel for eight years . . . and it promises to be a publication to remember. An ex-corporate enforcer, Hakan Veil, is forced to bodyguard Madison Madekwe, part of a colonial audit team investigating a disappeared lottery winner on Mars. But when Madekwe is abducted, and Hakan nearly killed, the investigation takes him farther and deeper than he had ever expected. And soon Hakan discovers the heavy price he may have to pay to learn the truth.
Visa hela texten

The Dark Defiles is best of the series. Morgan built a fascinating world, dirt and all, and populated it will heroes that were also real people. Morgan dissects the idea of hero and looks at it from every angle. Our three protagonists aren't anti-heroes they are just flawed. While they deal with their flaws they realize that in the end heroes don't get to live happily ever after. * Buzzy Mag * Super fluid action thriller... amped-up Chandler in space. * GUARDIAN * A hugely entertaining and smartly written book. * SFX MAGAZINE * A sheer pyrotechnic triumph: wonderfully imaginative, written in overdrive, mercilessly violent... A twisted conundrum and a hell of a ride! * CRIME TIME *

Richard Morgan was, until his writing career took off, a tutor at Strathclyde University in the English Language Teaching division. He has travelled widely and lived in Spain and Istanbul. He is a fluent Spanish speaker. Winner of the Athur C. Clarke, John W. Campbell and Philip K. Dick Awards his books are published around the world. He lives in Norwich with his family.