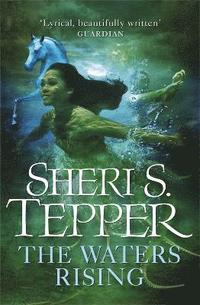 av Sheri S Tepper
Häftad Engelska, 2011-12-08
149
Köp
Spara som favorit
Skickas inom 7-10 vardagar.
Gratis frakt inom Sverige över 159 kr för privatpersoner.
Finns även som
Visa alla 3 format & utgåvor
The long-awaited and much-demanded sequel to A PLAGUE OF ANGELS, continuing the story of Abasio, once a farmboy, now, so Blue, his talking horse, is happy to inform people, a man who goes hither and thither helping orphans in this world where renascent mythical beasts and fairy tale 'archetypes' now live. ... And when he comes agross little Xulai from Tingawan, one of the Ten Thousand Islands, far across the western Sea, she informs him that she too is an orphan, and implores his help carrying out the last request of the Princess Xu-i-lok, who has been dying since the day she married Duke Justinian, who refused the royal order to marry Alicia, the Prince's sister. Xulai is Princess Xu-i-lok's Soul Carrier, and the task she must complete means visiting the scary forest in the dead of night - but it is the only thing that will bring the princess a measure of peace. Abasio, helper of orphans, promises though she must do this alone, he will be near, to aid her if necessary ... and it is, for there are dark things abroad ... And Xulai's job is not yet done, for with the princess now dead, the grieving Duke is left a widower - and Alicia, Duchess Altamont, still wishes to marry him. It's not just the man she wants, but his lands too ... and her plans do not bode well for anyone except her ...
Visa hela texten

"The Waters Rising" delivers a strong, complex story that poses tough questions and demands a new look at the possibilities of the future."--Wichita Eagle "This lyrical, beautifully written novel transcends the sum of its parts to become a parable of survival and hope in hopeless times."--The Guardian "Tepper holds up a funhouse glass to customs and mores many of us take for granted. . . . She provides a good story, with sympathetic characters and plenty to think about."--Denver Post "Tepper balances pointed criticisms of our era with a calamity that appears to owe far more to Genesis than to science...the writing is slick and crafeully crafted, Xulai has plenty of pluck, and her companions possess a nearly ideal mixture of virtues, flaws, and enthusiasm for redemptive sacrifice."--Publishers Weekly "Tepper has developed a dependable following with works that have an epic fantasy feel but that ultimately reveal logically consistent scientific trappings. This work is no exception, a successful blend of dying-earth fantasy and wicked-witch fable."--Booklist "Full of fascinating characters and beautifully detailed settings . . . complex and multifaceted . . . As always, Locus Award-winner Tepper wields grand science fiction themes with skill, vision and a twist of black humor."--Publishers Weekly (starred review) ""The Waters Rising, " stands as a thoughtful allegory for environmentalism."--Iron Mountain Daily News

Sheri S. Tepper is the author of several resoundingly acclaimed novels, including THE MARGARETS and GIBBON'S DECLINE AND FALL both shortlisted for the ARTHUR C. CLARKE AWARD, A PLAGUE OF ANGELS, SIDESHOW and BEAUTY, which was voted BEST FANTASY NOVEL OF THE YEAR by readers of LOCUS. She is one of the few writers to have titles in both the SF and Fantasy Masterworks lists.