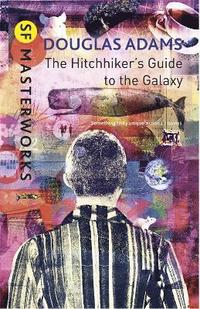 The Hitchhiker's Guide To The Galaxy

av Douglas Adams
(1 röst)
Inbunden Engelska, 2012-05-10
110
Köp
Spara som favorit
Skickas inom 7-10 vardagar.
Fri frakt inom Sverige över 159 kr för privatpersoner.
Kan levereras innan jul!
Finns även som
Visa alla 3 format & utgåvor
One Thursday lunchtime Earth is unexpectedly demolished to make way for a new hyperspace bypass. For Arthur Dent, who has only just had his house demolished that morning, this is already more than he can cope with. Sadly, however, the weekend has only just begun. And the Galaxy is a very, very large and startling place indeed ... The Hitch Hiker's Guide to the Galaxy became a massive cult success when it was first published and continues to sell all over the world. It introduced such memorable characters as Arthur Dent, Marvin the Paranoid Android, Zaphod Beeblebrox and, of course, the Vogons, and remains one of the funniest, most irreverent and entertaining novels ever.
Visa hela texten

Douglas Adams came to world-wide prominence with the BBC Radio series THE HITCHHIKER'S GUIDE TO THE GALAXY, which subsequently became the bestselling novel, a television series, a stage play, a computer game, audio cassettes, CD-roms and a towel, and was followed by the last two books in the original trilogy, THE RESTAURANT AT THE END OF THE UNIVERSE and LIFE, THE UNIVERSE AND EVERYTHING. All three are published as Gollancz presentation hardbacks. The final two books in the Hitchhiker Trilogy are SO LONG AND THANKS FOR ALL THE FISH and MOSTLY HARMLESS. Douglas Adams, who died in 2001, is also the author of DIRK GENTLY'S HOLISTIC DETECTIVE AGENCY and THE LONG DARK TEA-TIME OF THE SOUL, THE MEANING OF LIFF (with John Lloyd) AND LAST CHANCE TO SEE (with Mark Cawardine), and editor of THE UTTERLY UTTERLY MERRY COMIC RELIEF CHRISTMAS BOOK.